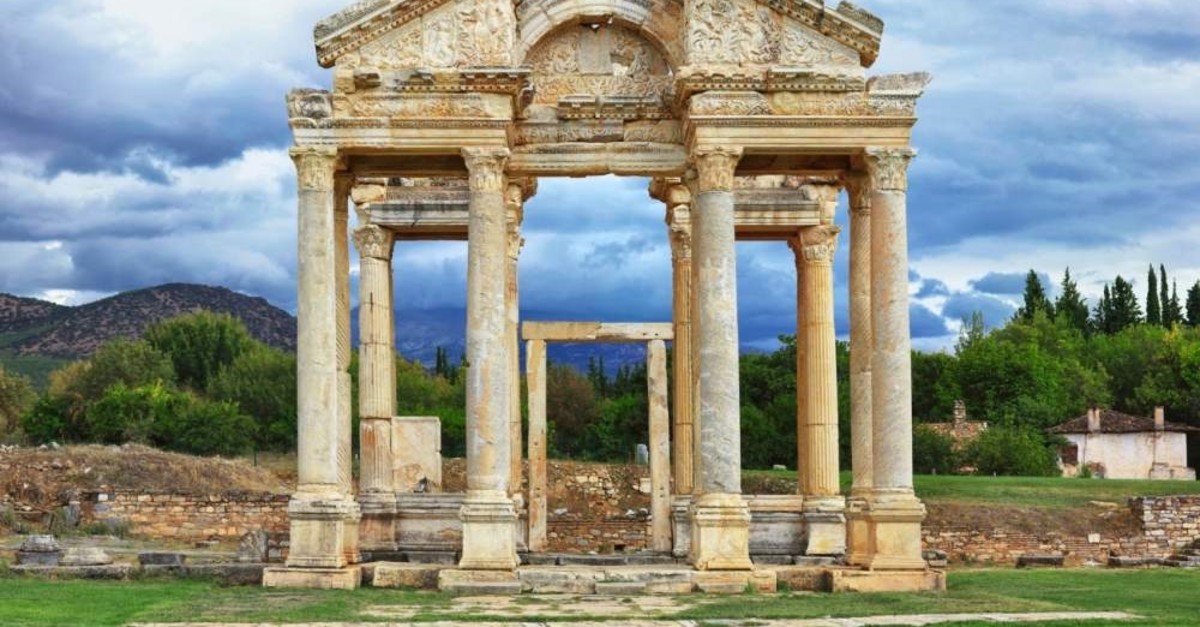 As an ancient city devoted to Aphrodite, the goddess of love and beauty, Aphrodisias is one of the most important archaeological sites of the Greek and Roman periods in Turkey

Valentine's Day is here, and love is in the air. Hence this week, as a part of our escapade to discover UNESCO heritage sites around Turkey, we make our way to the city that is named after the Greek goddess of love, Aphrodite.

Aphrodisias, the city of Aphrodite, is located in the village of Geyre in the western province of Aydın, just a two hours' drive from the world-famous Ephesus. Having bloomed in the fertile valley formed by the Morsynus River in the ancient region of Caria, Aphrodisias was once the meeting ground of not only merchants, like many of the still-standing Greek towns in Anatolia, but also of lovers – star-crossed or not.

Aphrodisias thrived from the second century B.C. until the sixth century B.C. The city was built near a marble quarry so it was not surprising that this city of love was once glistening under the Mediterranean sun thanks to its marble facade. The city was built and named by the Greeks, but later the Romans, who called the goddess of love Venus, adopted the city as the sacred place of love. Subsequently, pilgrims flocked to the city to pay homage to the fairest goddess of them all.

As it was founded near a marble quarry, the sculptures carved in Aphrodisias adorned Greek and Roman cities for centuries. After the fourth century A.D., Aphrodisian sculptors were in great demand for marble portrait busts and statues of emperors, governors and philosophers in the major centers of the Roman Empire. This made the city not only a hub for pilgrims but for artists as well.

When Christianity spread throughout the region, the city did not lose its importance. Christians turned the city into a new kind of place of love – a chaster one. However, when the pilgrims stopped coming to the site, the city went into decline. In the seventh century A.D., a huge earthquake shook the city to the ground, and Aphrodisias was never able to recover again.

What to see in Aphrodisias?

The Temple of Aphrodite is as old as the city itself. Although, unfortunately, there is not much to see except for some columns and a few details that have survived since its foundation, the site is crucial to understand life in the city as it was home of the Cult of Aphrodite. The Aphrodite of Aphrodisias, which was materialized by a statue standing in the center of the temple, according to the archeologists, was not only the goddess of love but also a symbol of fertility, beauty and eternal love. With Christianity's arrival, the temple was transformed into a church, but not immediately. According to records, it took several hundred years for Christians to turn the temple into a church in 500 A.D.

Just like any other Greek or Roman city, Aphrodisias also has a theater with the capacity to seat 8,000 people. It is believed that the theater was not only used to stage plays but also animal or gladiator fights. It was adorned with beautiful carvings of animals and gladiators that once had entertained the locals. There is also a stadium in the city which is said to be one of the most well-preserved stadium ruins in the entire Mediterranean basin. It was basically a stage for sports events such as athletics but later used for carnivals and circuses as well.

There is also the Bouleuterion, which was used as a council house by the Romans. It was the center of power in the city. The wealthiest families of the city gathered here to discuss the future of Aphrodisias. It was a covered, theater-like structure, lined with marble seating for a maximum of about 1,700 people, with a two-story columnar marble stage-facade. The lower part of the auditorium has survived intact, with nine rows of marble seats divided into five wedges by radial stairways. The seating of the upper part, amounting to an additional 12 rows, has unfortunately collapsed.