Black Sea mapped: A region full of rhythm and colors beyond just kebabs and beaches 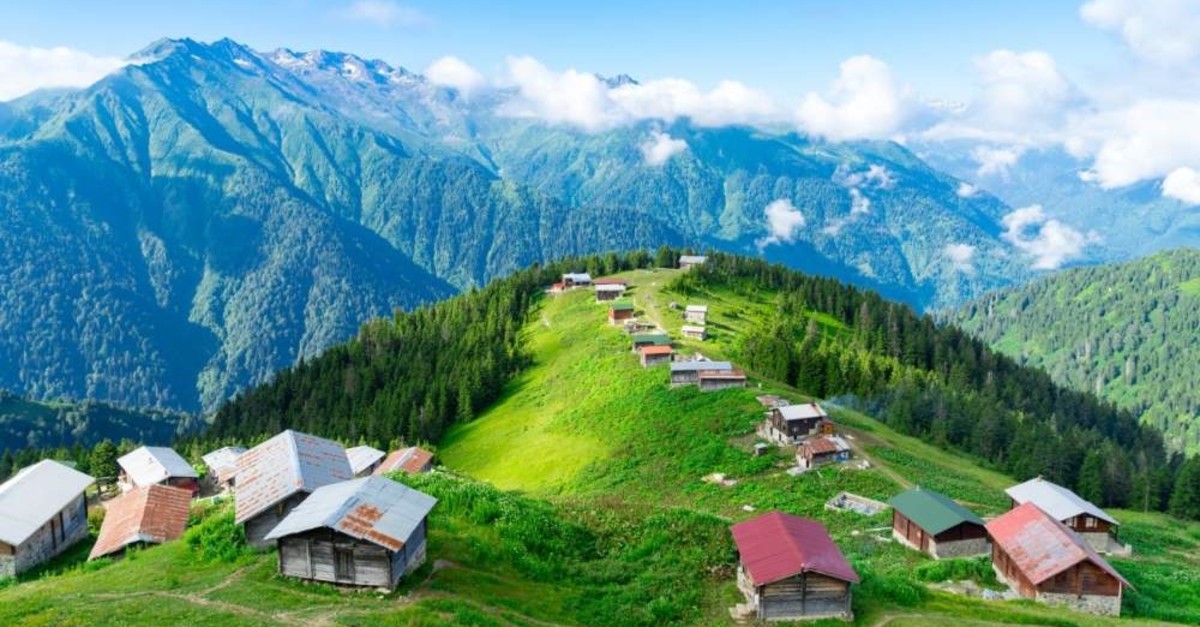 Ever wondered about the deep cultural traditions of the eastern Black Sea region? Shaped by witty, charmingly naive people, colorful garments and a long history, here's your chance to delve into the richness of Turkey's northern treasure

The culture of the people of the Black Sea is varied and manifold, influenced over the centuries by various cultures, populations and nomads each with their own unique characteristics. This helped shape the region into what it is today.

Black Sea culture is expressed through its folklore, clothing, cuisine, music and languages. Despite being widely diverse, each province in the region also has many similarities; for example, their love for black cabbage and dancing along to upbeat, energetic music.

The people of the eastern Black Sea region are also known for their quick wit, crazy schemes and naive sense of humor; in fact, many jokes called "Karadeniz fıkraları" are told about the natives of the region. Most of these feature the (semi) fictional characters Temel and Dursun, who could best be described as universal buffoons, and these form an important part of Turkish folk tales and oral tradition. 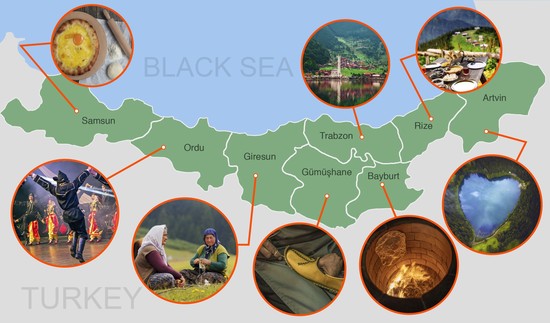 Within the scope of the "Black Sea Culture Inventory Project" carried out by the Eastern Black Sea Project (DOKAP) Regional Development Administration, each province's lifestyles, traditional clothing, folk dances, local music, instruments and dishes were tracked and researched for two years to create the region's very own cultural inventory.

The findings have now been penned in ink and transferred online, available for all to see at karadeniz.gov.tr.

Speaking to Anadolu Agency (AA), Yusuf Mengi, head of the DOKAP Regional Development Administration, said culture was the main ingredient that formed the fabric of a region.

Stating that they carried out a comprehensive study by organizing existing and newly discovered data about folk culture, Mengi said: "We aimed to reveal the crafts and cultural fabric of the region."

Mengi said they hopped from village to village, going far and wide and up and down the evergreen mountains of the Black Sea, going door-to-door and conducting one-on-one interviews with locals to get a better grasp of what it means to be from the Black Sea.

"The Black Sea is a region with a very rich cultural texture. Each and every province and district in this region has different cultural practices and values. With this study, we were also able to map out the general cultural texture of the region to see what creates the image of a person from the Black Sea," he said. 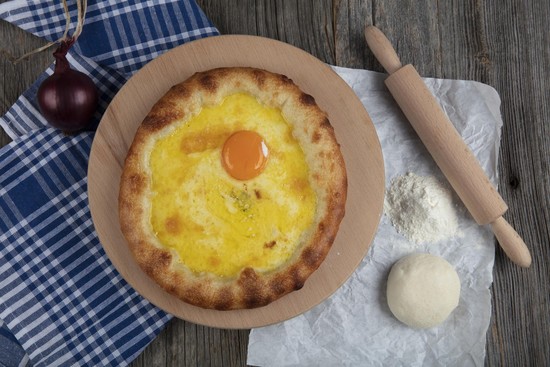 More modern variations of the famous Samsun pide are open and often feature a last-minute egg on top, ready for dunking the crusty edges. (iStock Photo)

In the coastal areas of the province, women were found to wear traditional garments such as aprons, keffiyeh (a traditional Arabian headdress made out of a square cotton scarf) and çatma (a type of velvet), while men chose shoes such as çapula and flat-heeled shoes called "yemeni," while wearing trousers called "British underpants/drawers" that look like breeches or traditional baggy horse riding pants, which have a slouchy fit up until the knee and then slim down drastically to be buttoned on the sides. Atatürk was known to sport this type of pants back in the day.

Dances accompanied by the sounds of the davul (bass drum), zurna (woodwind instrument) and the famous Black Sea fiddle kemençe are common in Samsun. In addition to these, in the settlements where there are immigrants from the Balkan and Caucasus regions, traditional Rumelian and Caucasian folk dances are also popular.

Samsun cuisine carries traces from the Black Sea, Anatolia, Balkans and the Caucasus. 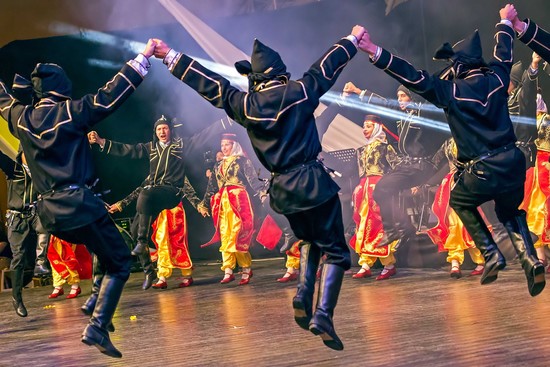 In the past, men's clothing in the region was traditionally made from fabrics called shawls (şal) in some parts, and these handwoven fabrics are used widely in local outfits nowadays too.

Women's clothing incorporates elements such as hoops, keşans and aprons, lace, towels, needlework, skirts, mintan (a type of chainse or dress), basma (a type of fabric printed with designs featuring flowers and other patterns in different colors), velvet dresses, vests, baggy trousers as well as shoes such as çarıks (a handmade type of slip-on shoes, similar to a rawhide sandal or pile shoe.)

The popular horon and karşılama folk dances reflect the characteristics of the Ordu local well. 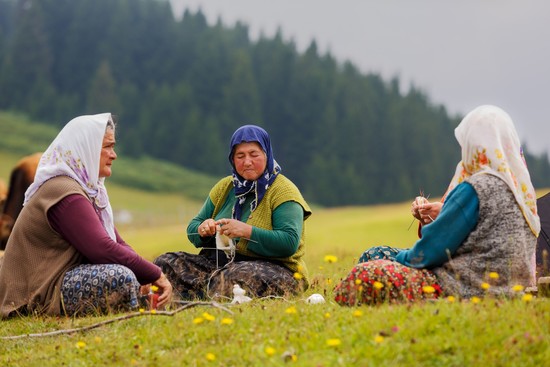 The aprons women used to tie around their waists or wrap around their heads are the first things that stand out among the province's traditional clothes.

Men wore slim jodhpurs made of black or navy blue broadcloth with the seams embroidered with black silk instead of trousers, as well as vests, gabardines called aba, headpieces, and yemeni-style boots.

In Giresun, horon, sallama, kol havası, karşılama and metelik are among the traditional local folk dances.

Like most of the Eastern Black Sea region, vegetables such as black cabbage or collard greens, corn, beans, zucchini and peas are consumed intensively. 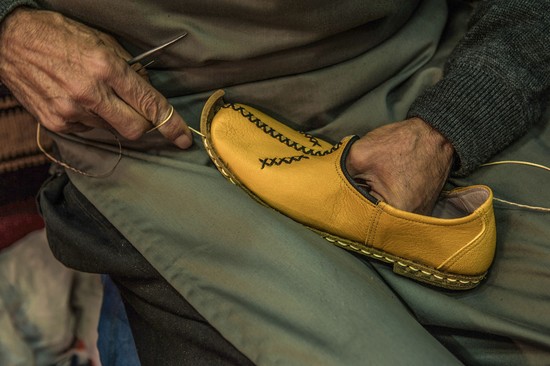 Çarıks are a style of Ottoman shoe that resembles a genie's slipper. (iStock Photo)

People living in the northernmost parts of Gümüşhane tend to use more linen in their traditional clothing, whereas toward the midlands, and especially in Kelkit, Köse, Şiran and the central district which make up the eastern and southern parts, eastern and Central Anatolian influence can be seen.

In the past, the men of Gümüşhane wore shalwars that were different from those traditionally worn in southeastern Anatolia. They also wore shirts made from calico or cloth. While women wore white polka-dotted black sheets, silk fabrics in all sorts of colors with ruched waistbands, loose robes called entari, dresses called fistan and çarık slippers.

Traditional dishes include a yogurt soup made with chickpeas, cracked wheat and corn called gendime, katıklı soup, which is similar to gendime but made with added cannellini beans and usually served cold, ezeltere tuzlaması, a dish made with cannellini beans, garlic and aniseed, fasulye bulgurlusu (green beans and bulghur), beef with quince, and çirmiş-style meatball stew.

Among the traditional clothing of the men of Bayburt, there are keçe külah (felt cone-shaped headpieces) and fezzes, and traditional shirts or tops such as göynek, gezeki and güngörmez.

Meanwhile, the women of Bayburt traditionally wore headdresses called tepelik and çırnakça as well as köynek, üç etek – similar to the traditional, embroidered Turkish henna nightdress but with the skirt divided into three parts and shalwars.

Folk dances are called "bars" in Bayburt. These dances are generally performed in either a line or in a semicircle.

Tandoors have a very important place in Bayburt culture. There are many dishes such as chard pickle roasted with onion, tomato paste, butter and vegetable oil, çılbır (a dish made with eggs, butter, onions, hot water and fried or sautéed meat) and papara made with bread Turkish chivil cheese (similar to string cheese), butter and water. 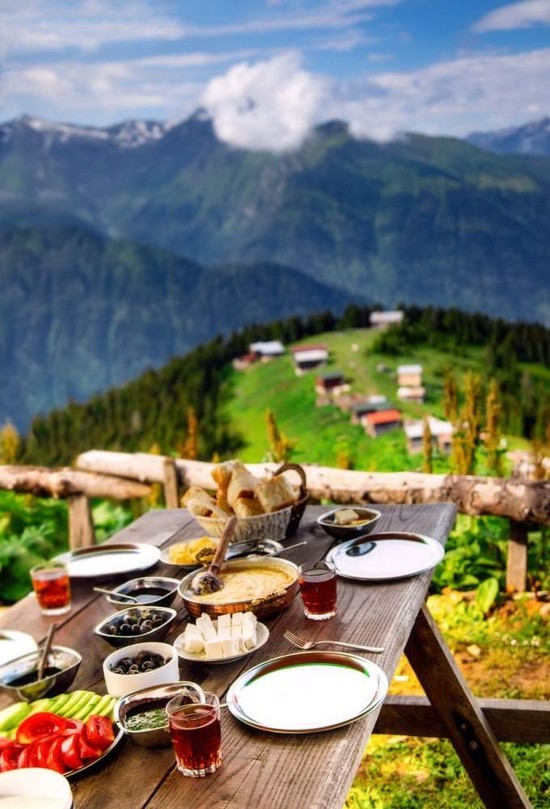 A classic Black Sea breakfast must include muhlama or kuymak, and a spectacular view. (iStock Photo)

The most distinctive feature of the traditional local clothing of Rize province is the "Rize bezi" or "feretiko," a type of cloth woven with jute fibers, and linen fabrics. Shirts woven with this fabric are called "feretiko shirts" in Rize.

Almost all of the folk dances played in Rize and its surrounding areas are called horon. 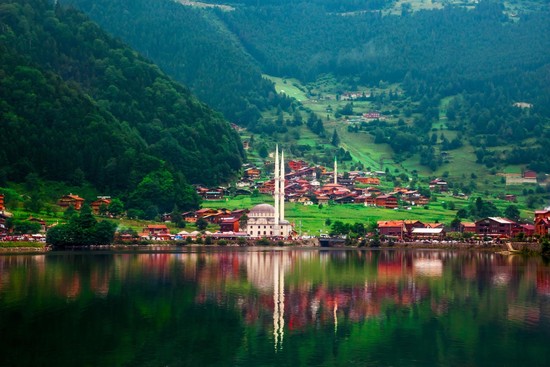 Surrounded by mountains and adorned with the greenest of trees, Uzungöl (Long Lake) is the jewel of Trabzon. (Okan Metin / iStock)

Some traditional items for this area include çarıks, black rubber shoes called kara lastik, potin, entaris, aprons and leather, sock-like boots called mes. The most striking among them all is the white, red, horizontally lined or checkered aprons the village women tie to their waists.

The main instrument used in local music is the kemençe. 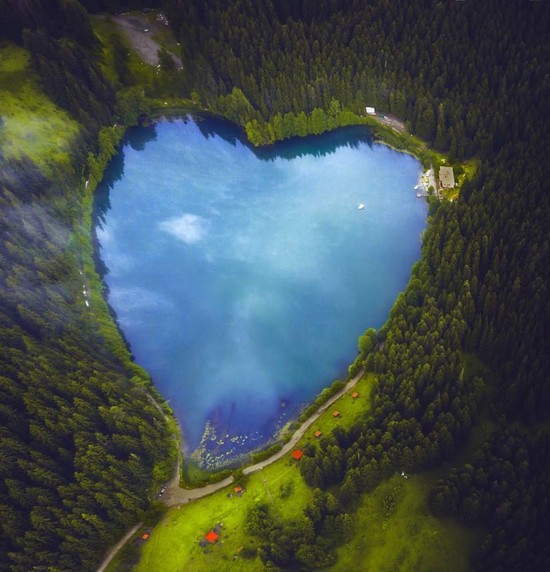 It's possible to still see the traces of traditional clothing and culture in the elderly population nowadays. Men's clothes usually consist of trousers, shirts and jackets, which are mostly made out of thick, dark wool.

Local folk dances show similar characteristics with those of the surrounding provinces and the people of the Caucasus. Atabarı is the symbolic folk dance of Artvin. Koççari, Cilveloy and the Acara horon are also indigenous to the area.