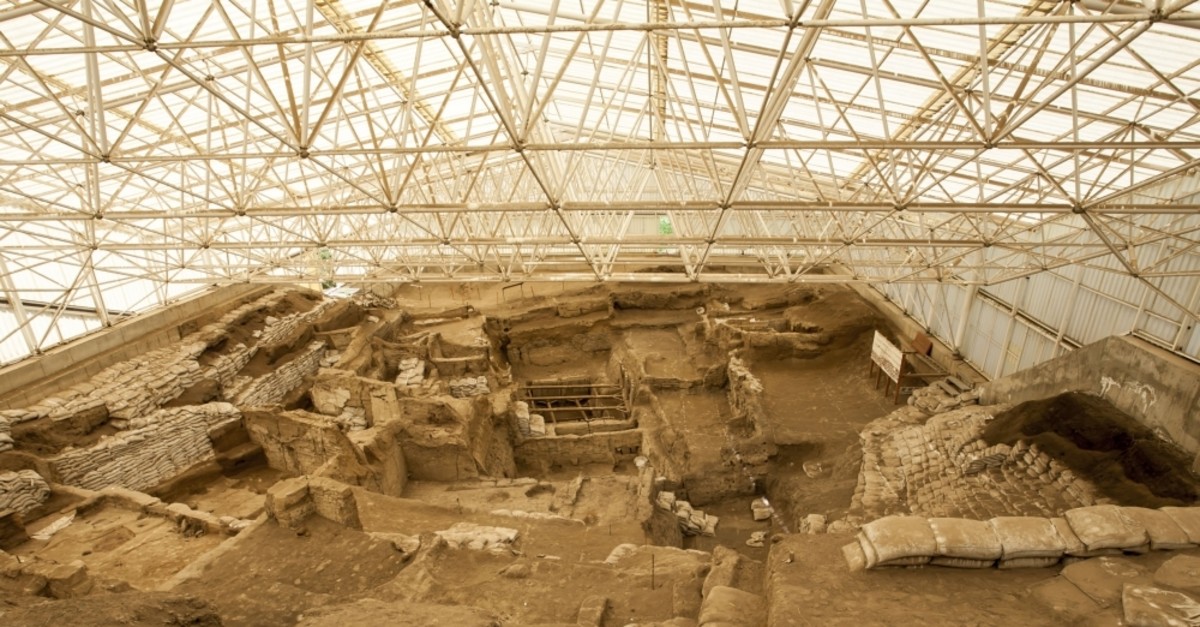 People from the Central Anatolian city of Konya have always known that somewhere in the vast plateau they lived in, were remnants of Anatolia's first human settlers and the enormous civilizations they left behind. However, the locals would never have thought about digging these mounds that were actually a bridge between past and present. When British archaeologist James Mellaart set foot on the plateau in 1958, he knew that he was about to make some major discovery, but even he did not anticipate how his findings would change the course of history. Welcome to Çatalhöyük, one of the world's best-preserved Neolithic settlements ever discovered – a window to mankind's prehistoric lifestyle.

Just a few kilometers from the city center of Konya lies a vast plateau that has been feeding Anatolians since the dawn of time. When you look at the plain that seemingly goes on forever, you will see two mounds. Although now covered with a special roof, the mounds went nearly 20 meters ground up. These mounds hide the remnants of numerous civilizations that called these lands home for more than two millennia. Beginning some 9,500 years ago, roughly around 7,500 B.C. and continuing for nearly 2,000 years, people settled in Çatalhöyük and built hundreds of mud-brick houses, burying their dead beneath the floors and adorning the walls with paintings, livestock skulls and plaster reliefs.

In fact, besides Neolithic people, Greeks, Romans, Byzantines and the first Turks that set foot in Anatolia have all lived in Çatalhöyük at different times. However, what excites archaeologists the most is the site's prehistoric origins, offering more information about the Neolithic era than any other site in the world. It provides important evidence of the transition from settled villages to urban agglomeration, which was maintained for 2,000 years. Hence, in 2012, UNESCO declared Çatalhöyük a World Heritage Site. It has been protected by leading organizations from around the world ever since.

Çatalhöyük consists of two mounds – one in the east and the other in the west. The eastern mound, which is the largest, is composed of 18 different layers, each representing a different Neolithic occupation. Excavation at Çatalhöyük continued for nearly half a century, revealing many things about Neolithic-era life.

First of all, Çatalhöyük was not a small town. Archaeologists estimate that more than 7,000 people lived in the settlement. The inhabitants lived in mud-brick houses that were crammed together in an aggregate structure. There were no roads or streets, so the locals walked on roofs and entered their houses through hatches that opened up on the roof. These roof-doors provided ventilation as well as serving as windows since the houses had none.

What amazed archaeologists the most is how little garbage and waste they discovered in the houses. It is believed that the people of Çatalhöyük were extremely careful about the cleanliness of their houses and wasted no food, which is inspiring and almost impossible for the 21st-century man.

The bones discovered at the site suggests that the people of Çatalhöyük led healthy and active lives. They ate a varied diet containing both animal products, such as fish and beef, as well as grains like barley and wheat. When a family member died, the rest of the family buried him or her under the floor of their house. The bodies were often tightly bound in a flexed position and placed in a simple grave with few or no artifacts.

Çatalhöyük locals may have not buried their dead with artifacts but this did not mean they did not enjoy a little bit of art in their living spaces. Both the internal and the external walls were richly decorated with murals. Archaeologists have also discovered numerous figures, including a relatively newly discovered 8,000-year-old figurine that is clearly the work of a very skilled artisan. Although a temple-like structure has not yet been discovered at the site, experts believe that the rich symbols in the murals and figurines are thought to have been dedicated to the goddess of fertility, suggesting that people of Çatalhöyük were quite religious.

What to see in Çatalhöyük?

When you visit Çatalhöyük, you can start with either of the mounds but I'd advise you to start with the eastern, more ancient one. You can easily observe the houses, their walls, the burying sites as well as the murals and carvings on the walls. When you compare the artistic development of the east and the western mound (the more recent one) you will easily understand Çatalhöyük's cultural evolution.

With the careful displays set up by the archaeologists, you can picture the daily lives of the people of Çatalhöyük right in front of your eyes. To protect the sites from harsh weather conditions, specials roofs were installed over the excavation and exhibition site some years ago. Now, you can easily enjoy a trip to the Neolithic age regardless of rain or snow.

Most of the findings, such as figurines and tools discovered at the site reside at the Konya Archaeological Museum. Some of the more important findings, however, are exhibited in the Museum of Anatolian Civilizations in Ankara.