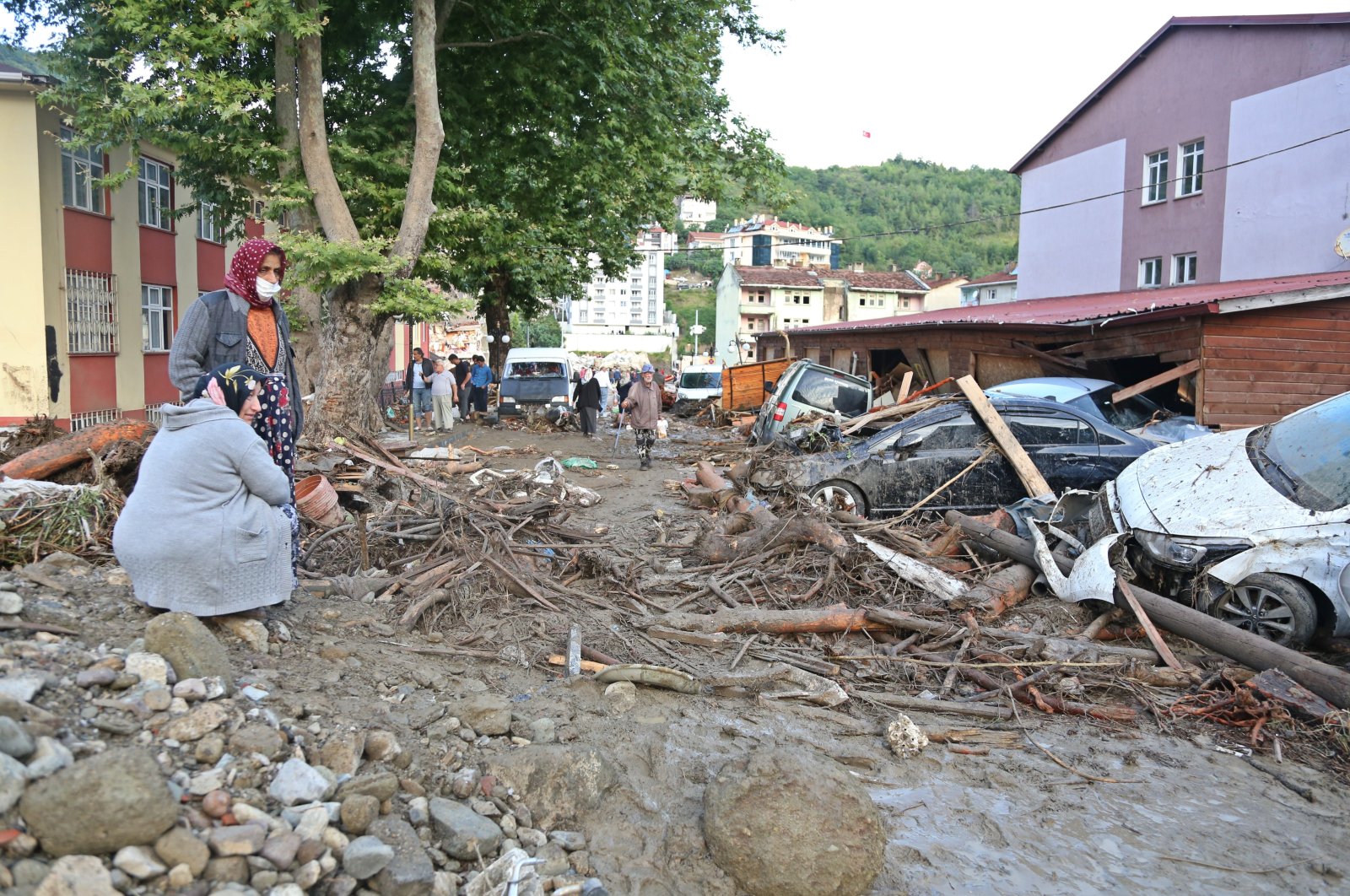 People inspect the debris and destruction caused by floods in the Bozkurt district of Kastamonu province, northern Turkey, Aug. 12, 2021. (İHA PHOTO)
by DAILY SABAH Aug 12, 2021 9:00 am

Floods have claimed 17 lives in the provinces of Kastamonu and Sinop, and one person remains missing in Bartın as the Black Sea region grapples with two days of torrential rain. The flooding prompted evacuations and destroyed buildings, bridges and roads

The death toll from the severe floods and mudslides that struck the central Black Sea region of Turkey has risen to 17 and one more person is still reported missing, authorities said late Thursday.

Heavy rainfall late Tuesday caused floods and landslides in an area spanning from Bartın in the west to Sinop in the east of the region prone to floods due to its climate. Rainfall sporadically continued on Wednesday and Thursday. Search and rescue crews were deployed in areas affected by floods, evacuating people stranded in their houses and cars.

President Recep Tayyip Erdoğan expressed his condolences to the families of the 17 citizens who lost their lives in the floods.

"We are carrying out intense efforts with all our institutions and organizations in the areas the flood has affected," Erdoğan said on Twitter late Thursday.

As floodwaters began to recede across the affected regions, a statement from the Disaster and Emergency Management Authority (AFAD) said rescuers had recovered six bodies in Kastamonu.

VIDEO — The moment an 8 story building gets heavily damaged by floods in Turkey’s Kastamonu pic.twitter.com/nKnk80t3qQ

Some 300 people in Bartın’s Ulus district, where an 80-year-old woman went missing after floods tore her home apart, were evacuated.

In Kastamonu’s villages and neighborhoods, 210 people were evacuated from a region affected by floods. Helicopters airlifted stranded people who climbed up onto the roofs of buildings in the Bozkurt and Abana districts of Kastamonu on Thursday.

Television footage showed some multistory buildings located next to a stream had collapsed in Bozkurt, but there was no word of any casualties. The AFAD said another 106 people were airlifted in villages near Ayancık, the worst-hit district in Sinop, where the sole public hospital was inundated with floodwaters, forcing the evacuation of patients. Floods also led to power cuts in 271 villages in Kastamonu, Bartın and Sinop.

Pakize Yorulmaz, a resident of Bozkurt district, said the floodwaters were "waist-high" in her house.

"(Rescue crews) took us from home around at 3 a.m. in the night. We were very scared," Yorulmaz told Ihlas News Agency (IHA) Thursday. She said they were outside when floodwaters started taking hold and ran home. They returned to find their house had been flooded too and had to climb up on the roof.

Gülizar Yorulmaz, another local, said they huddled together with their neighbors on the sixth floor of their apartment building. "I could see buildings across the street were being brought down by floods. People were hugging each other and crying. We thought we would be next," she said.

Ayşe Kalabalık said she had not heard from her family since Wednesday. The family was living in a building that collapsed during the floods. "May God help me," she said in tears as she joined a group of people waiting for search and rescue of their loved ones trapped in flooded buildings. Kalabalık, a resident of Bozkurt for more than 30 years, says she has never seen such a disaster in her life.

Aydın Tunç, a taxi driver, said he and his passengers barely escaped when a bridge collapsed on the road. Tunç was taking his seven passengers to the Ulus district from Karabük province Wednesday. “There was heavy rain while I was driving and asked my passengers if they knew if there was any flood risk. I felt like that the rain would be followed by floods and unbuckled my seat belt. I thought I could escape faster if I did not wear the belt, in case of floods sweeping away the car. I slowed down when we approached a spot after the passengers told me that there could be floodwaters ahead. I hit the brake when I saw rocks and trees strewn ahead but the car skidded and fell into a gap in the road. I saw waters roaring behind us,” he said, recalling moments of horror during the disaster.

Tunç and his passengers managed to exit the car dangling on the edge of a collapsed road, but another car had already fallen into the void. Search and rescue crews were busy saving whoever they could. “I have never seen such a rainfall. This was a real disaster,” Tunç told Anadolu Agency (AA).

Floods and landslides led to the collapse of some bridges and roads in the region. Work is underway to restore access to some villages.

The Turkish Red Crescent (Kızılay) also dispatched teams to the region to help the flood victims. Some 200 volunteers delivered aid to survivors in Sinop’s Ayancık, Bartın’s Ulus and Kastamonu’s Azdavay districts. The charity sent mobile kitchens to deliver meals to people displaced by floods while food packages were also distributed to the victims.

The weather forecast showed that the torrential rains were expected to cease by late Thursday.

A delegation of ministers, including Interior Minister Süleyman Soylu, Environment and Urban Planning Minister Murat Kurum, and Transportation and Infrastructure Minister Adil Karaismailoğlu visited flood-hit areas. The ministers met with locals and pledged the recovery of their losses.

Erdoğan earlier on Thursday spoke with local officials of flood-hit areas over the phone and ensured that Turkey is using all available means to help people recover after the floods.

Several municipalities, including the capital Ankara's municipality, announced that they were sending search and rescue crews, equipment and humanitarian aid to the region.