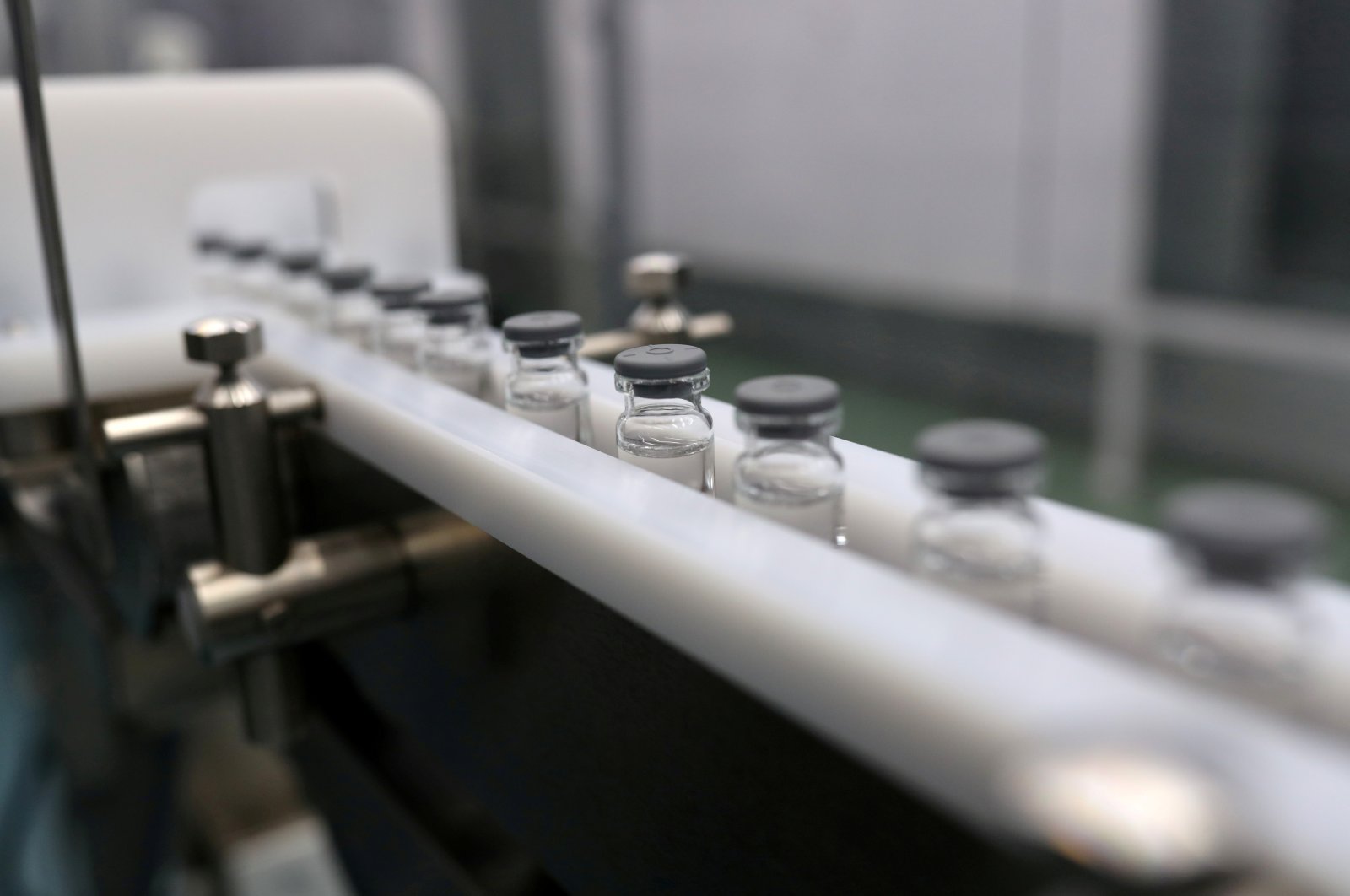 Glass bottles are seen at the bottling section where the Coronavac, Sinovac's vaccine against the coronavirus, will be produced at Brazil's biomedical center Butantan Institute in Sao Paulo, Brazil Dec. 22, 2020. (Reuters File Photo)
by DAILY SABAH Dec 24, 2020 7:34 pm
RECOMMENDED

The first shipment of coronavirus vaccines developed by Chinese biopharmaceutical company Sinovac will be dispatched to Turkey Sunday night and will arrive on Monday, the country’s health minister announced Thursday.

Turkey will initially receive 3 million doses of CoronaVac, Fahrettin Koca told a press conference after a meeting of the country’s Coronavirus Scientific Advisory Board.

An infectious disease expert serving on Turkey’s board said CoronaVac is 91.25% effective and the rate is likely to increase based on late-stage trial data.

Ünal said no major side effects were detected during the vaccine trials in Turkey, except in one case where an allergic reaction was observed.

Koca said the results were the first to be announced for CoronaVac.

Sinovac has also inked supply deals for its vaccine with countries including Indonesia, Brazil, Chile and Singapore, and negotiations with the Philippines and Malaysia are underway.

“With the evaluations of the scientific board, we are sure the vaccines will be effective on people using it in our country," Koca said.

“We are now confident that the vaccine is effective and safe for Turkish people,” he added.

Nearly 9 million people in Turkey are set to get vaccinated in the first stage, starting with health workers and risk groups, Koca said.

People in the top three priority groups will be vaccinated in January, February and March, or in April at the latest, he added.

Koca said they will have the capacity to administer some 1.5 million or even 2 million vaccines daily.

“Together with health care professionals, I will be one of the first people to get the vaccine,” the minister stressed.

The deal could be finalized as early as Thursday or Friday, he added.

Turkey could get 4.5 million doses until the end of March and would have the option of procuring 30 million more doses of the vaccine later on, Koca explained.

In addition, he said Turkey has not registered any cases of the new coronavirus variants as of now, adding that they would carry out a genome analysis next week for further inspection.

In the meantime, the country on Thursday reported 18,102 new coronavirus cases, including asymptomatic ones, in the last 24 hours, according to the Health Ministry data.

Total cases since the beginning of the pandemic exceeded 2.1 million it showed.

The number of patients in critical condition stood at 4,805.

Ankara has imposed full weekend lockdowns and weekday curfews to curb the number of daily infections.

The pandemic has claimed more than 1.73 million lives in 191 countries and regions since last December.

Over 78.9 million cases have been reported worldwide, with more than 44.49 million recoveries, according to figures compiled by the U.S.’ Johns Hopkins University.

The U.S., India, and Brazil remain the worst-hit countries in terms of the number of cases.

While new restrictions are being imposed ahead of the holiday season, especially across Europe, countries are approving and procuring vaccines to pave the way for the hopeful end of the pandemic.