About 150 Kurds go on trial in Turkey 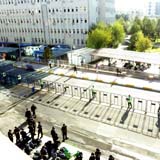 More than 150 Kurds, including a dozen elected mayors, went on trial Monday for alleged links with a Kurdish guerrilla group at a time when the Turkish government is engaged in efforts to reconcile with the members of this ethnic minority.

ANKARA, Turkey (AP) -- Kurdish politicians demand the acquittal of all suspects who face between five years to life in prison for alleged membership in a "terrorist organization" and attempts to divide the state. The trial will run through Nov. 12 in Diyarbakir, the largest city in the Kurdish-dominated southeast.

It comes at a time when Prime Minister Recep Tayyip Erdogan's government is trying to win the hearts of Turkey's Kurdish population - who make up 20 percent of Turkey's population - by granting them more cultural rights, and after Turkish officials have reportedly held secret talks with an imprisoned Kurdish rebel chief to try and end the bitter fighting with his autonomy-seeking rebels.

The fighting has killed tens of thousands of people since the rebels took up arms for autonomy in Turkey's southeast in 1984.

The Kurdish rebel group has recently declared a unilateral cease-fire in hopes of opening a dialogue but Turkey has ignored all such declarations.

"We want the acquittal of all our friends without any exemption," said Selahattin Demirtas, the head of the country's pro-Kurdish Peace and Democracy Party. Hundreds of the group's supporters gathered Monday outside the court in support of the suspects, as European human rights activists and lawyers arrived in Diyarbakir to monitor the case.

Snipers took up positions on roof tops as police escorted about 100 of the suspects into the court under tight security. The suspects include the popular mayor of Diyarbakir, Osman Baydemir, who had publicly called for Kurdish autonomy. About 20 of the suspects are at large but are being tried in absentia.

"We see this case as a critical turning point for a lasting peace," Ahmet Turk, a former lawmaker and head of a now banned pro-Kurdish party, said Monday outside the court house. "This case might lay the first steps toward peace."

The suspects insisted on defending themselves in the Kurdish language as an expression of Kurdish identity. The pro-Kurdish party and the rebels demand education in state schools in Kurdish, but Turkey refuses to allow it because of fears that it could divide the country along ethnic lines.

"The defense in mother tongue is a natural right, we want to use this right," Hatip Dicle, one of the suspects, told reporters during a break.

The court was considering the suspects' request, but was likely to reject it.

Erdogan insisted Sunday that citizens of "Kurdish origin have equal rights and opportunities" in Turkey. He accused Kurdish politicians of garnering support for rebels in the region and encouraging violence, in remarks that angered Kurdish politicians and activists ahead of the trial, according to Turkey's private NTV television.

"If they are sincere, then they must leave their guns and then come to the ballot box," Erdogan said. "It is easy to win votes by issuing threats."