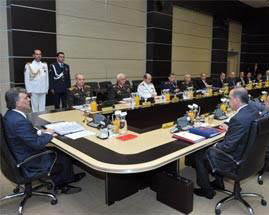 The National Security Council (MGK) on Wednesday agreed to make radical changes to a document referred to as the “Red Book,” in which the main threats to Turkey's security are outlined, referring to Israel's instability-inducing actions in the Middle East as a threat.

Turkey's approach to its neighbors has changed with the revisions, which were drafted by a team of experts headed by Prime Ministry Undersecretary Efkan Ala. Syria, Bulgaria, Georgia and Armenia are no longer among Turkey's list of external threats. The changes made to the National Security Policy Document (MGSB), which was drafted by the military in the past, are a sign that the government's priorities are finally reflected in state policy.

Turkey has for the first time referred to Israel's actions in the Middle East as a threat to Turkey. In the section on relations with neighbors and external threats, the document draws attention to the instability in the region caused by Israel and the possibility that Israel's actions may lead the countries in the region to be engaged in an arms race.

Turkey's bilateral relations with Israel have also turned into a Gordian knot since the deaths of nine Turks in a lethal attack by Israeli soldiers on a Gaza-bound humanitarian aid convoy on May 31.

The MGK convened on Wednesday under the chairmanship of President Abdullah Gül to discuss changes to the MGSB, also known as Turkey's secret Constitution or the Red Book. The statement made after the MGK meeting said, "The new MGSB was discussed and approved." The new document will be in effect for five years.

As for Greece, with which Turkey has come to the brink of war three times in the past over territorial disputes in the Aegean, Turkey still sees any Greek attempt to extend the country's territorial waters to 12 nautical miles as a casus belli (a cause for war). Turkey and Greece are at odds over the boundaries of their territorial waters and airspace in the Aegean due to the peculiar geography of the Aegean Sea, where some Greek islands are lined up along Turkey's western coasts. In 1995, Parliament declared any unilateral attempt by Greece to extend its territorial waters to 12 nautical miles from the current six miles as a casus belli.

Greece is not included in the "external threats" list either, aside from the "12 mile problem." Iran, seen as a major threat in earlier versions of the confidential document because of its Islamic rule and nuclear capacity, is no longer the number one threat for Turkey, although the document emphasizes that the Middle East should be cleansed of nuclear weapons.

Reactionaryism no more a threat

Turkey's perception of domestic threats has also been revised with changes to the document, which has been in effect since 2005. In the document, religious reactionaryism is no more mentioned as a domestic threat. The ruling Justice and Development Party (AK Party) had been working on the changes for a long time and said the state should not see its citizens as potential threats. The military wing of the council also agreed with the government on the issue and the famous "reactionary threat" was not cited in the new document. Instead, it mentions "radical groups exploiting religion," a term which, under the Turkish Penal Code (TCK), refers to groups that, by employing violent methods, use religion for destructive and separatist activities.

The MGSB was prepared for the first time after Turkey became a NATO member with US support against the threat of communism. Until the coup d'état of Sept. 12, 1980, communists and all of the left were seen as the biggest threat to Turkey. After the coup, separatism was included in the list of domestic threats. With the rise of the Welfare Party (RP) in 1995, religious reactionaryism and separatism became the main domestic threats. The latest version of the MGSB was approved on Oct. 24, 2005 by the MGK and then by the Cabinet on March 20, 2006.

The edited MGSB also contains new threats such as cyber terror, global warming and the aging population of Turkey. The document says cyber threats pose a threat to national security and that global warming may lead to environmental disasters.

The problem of aging population, an issue which started to dominate Turkey's agenda recently, also found a place in the new security document.

Population increase has been a matter of debate since the foundation of the Turkish Republic; for decades people have argued about whether it poses a challenge or is an advantage for Turkey. Latest demographic data reveal that the productive population, aged between 15-65, is on the rise in Turkey, while the population below 15, which had been on the rise until recently due to the high fertility rate in Turkey, is now on the decline.

The document says the aging population may pose a threat for Turkey if the country fails to develop specific policies on the issue.

Prime Minister Recep Tayyip Erdoğan has been expressing concern over the declining younger population in Turkey and suggests that his government may consider giving a "prize" to families that have at least three children.

The changes made to the MGSB were not the only agenda item during Wednesday's MGK meeting. Another topic on the agenda was a missile defense system project proposed by the US. Several US officials have implied in various statements that part of the missile shield could be set up in Turkey. The issue was taken up at a summit between defense and foreign ministers of NATO members in Brussels. Prime Minister Erdoğan, President Abdullah Gül and Chief of General Staff Gen. Işık Koşaner had a brief meeting after the MGK and reportedly discussed whether Turkey should be part of the defense shield.

The activities of the outlawed Kurdistan Workers' Party (PKK) were also discussed during the meeting. The council once again drew attention to the clandestine support given to the PKK by some countries, accusing these countries of insincerity in supporting Turkey's counterterrorism efforts.
CIHAN
Last Update: Oct 29, 2010 11:21 am