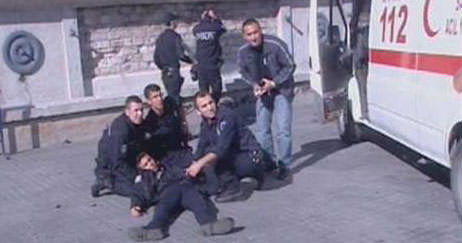 A suicide bomber wounded 32 people in an attack targeting Turkish police in Istanbul's main square on Sunday, an area teaming with tourists and shoppers.

ISTANBUL, Oct 31 (Reuters) - No organisation has claimed responsibility, officials said, though the city has been targeted in the past by Kurdish separatist militants and al Qaeda, as well as militants from Turkey's far-left.

Istanbul police chief Huseyin Capkin said a man had approached police stationed at the square before blowing himself up. Television footage immediately after the explosion appeared to show police firing warning shots and people fleeing in panic.

Fifteen policemen and 17 civilians were wounded in the attack at 10.40 a.m. in Taksim Square, but only nine, mostly police, were kept in hospital, Istanbul Governor Huseyin Avni Mutlu told reporters.

Taksim Square is a tourist and transport hub surrounded by restaurants, shops and hotels, at the heart of modern Istanbul.

The bomber struck near police buses parked close to a monument commemorating Mustafa Kemal Ataturk, the founder of modern Turkey, and victory in the war of independence in 1923.

The police presence in Taksim is raised around national holidays like Republic Day, which was celebrated on Friday.

Mobile phone footage taken just after the explosion showed a woman lying close to the monument bleeding heavily from her leg, and a policeman also lying with blood streaming from his head.

A taxi driver told CNN Turk news channel he saw a 30 to 33-year-old man approach the police to ask directions, at which point the bomb detonated. Another witness said he saw two men.

According to the governor, police seized plastic explosives found with a detonator at the scene, though it was unclear whether they had been part of a second bomb.

Prime Minister Tayyip Erdogan was visiting Mardin, in the mainly Kurdish southeast, when the blast struck his hometown.

"Those who threaten Turkey's peace, security and development will not be tolerated," he said in a televised speech. "These kinds of attacks will not stop Turkey reaching its goals of peace, brotherhood and development. We are together, we are brothers."

Istanbul is the business and financial centre of Turkey, an overwhelmingly Muslim nation of 75 million people that is hoping to become a member of the European Union.

The city has been targeted before by Kurdistan Workers Party (PKK) rebels, but the separatist group extended a unilateral ceasefire last month, and on Saturday said it would announce in the coming days whether it would extend it further.

PKK suicide bombers have attacked security forces in the past, but not for many years.

Al Qaeda suicide bombers carried out a series of attacks in Istanbul in November 2003 that killed 62 people and wounded hundreds.

In recent weeks Turkish police have made several arrests of people suspected of providing support to al Qaeda militants fighting in Afghanistan.

On Sunday, Anatolia newsagency reported police in Istanbul and other cities had detained 16 members of a leftist militant organisation, the Revolutionary People's Liberation Party/Front (DHKP/C). The report made no connection with the Istanbul attack, but in 2001 a DHKP/C suicide bomber killed two people in Taksim Square.