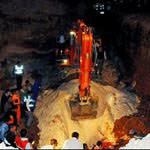 ISTANBUL — The Anatolia news agency says the accident happened Wednesday when villagers in Midyat in Mardin province were digging a hole as part of a traditional process for making a clay oven.

The agency quotes Mardin Gov. Hasan Duruer as saying two of the injured were in critical condition.

To build an oven, villagers heat clay in the hole, let it harden into a container shape and then remove it for cooking in homes.