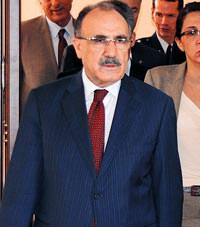 Turkey's government has removed three high-ranking officers from duty pending the outcome of a trial in which a group of military officers are accused of plotting to overthrow the Islamic-oriented government.

ANKARA, Turkey (AP) - The suspensions Wednesday were the first time the government removed officers from duty and came as another indication of the growing civilian authority over the military, which once shaped the country's politics.

The three _ two major generals and a rear admiral _ are among nearly 200 retired and active duty officers who go on trial next month in an alleged 2003 plot to create chaos and trigger a military takeover.

The military had promoted the three to key positions despite objections by the government.