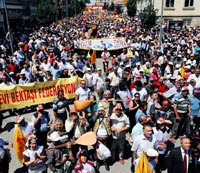 Turkey's Alevis, a distinct moderate sect of Islam, have put government support for religious freedom to the test by pressing for broader rights in a country where they are often seen as heretics.

The ruling Justice and Development Party (AKP) has launched a rare dialogue with the sizeable community.

But after several meetings between the two sides since 2007, Alevi leaders question Ankara's sincerity and hold out little hope that their demands will be met.

The government "does not go beyond listening to our problems... We do not expect any improvement soon," Ali Balkiz, a leading Alevi activist, told AFP.

The Sunni majority's prejudice against Alevis is deep-rooted: apart from the broad theological differences, there is the history of Alevi rebellions and their bloody supression.

Like Shiites, Alevis worship the Prophet Ali, the last of the first four Caliphs.

But they do not go to the mosque and do not fast during Ramadan. Alcohol is part of life and men and women mingle in religious rituals at shrines called "cemevi" (houses of gathering).

"The way we worship God is very different from the Sunnis... They want to assimilate us," said Cahit Albayrak, a community leader in Sivas, eastern Turkey. Sivas is the scene of one of the deadliest attacks on Alevis in the country's modern history.

Albayrak spoke in a local "cemevi" as young men and women performed the "semah" -- a ritual dance inspired by the Sufi tradition, in which the participants turn in circles and swirl.

The Alevis have been a loyal ally of Turkey's secular system, but the state never recognised their faith, perpetuating discrimination against a community that comprises about a quarter of Turkey's 70-million population.

The European Union, which Turkey is seeking to join, has regularly pressed for reform to grant Alevis equal rights with the Sunnis, who enjoy financial support from the state and whose faith dominates the curriculum of religious education in schools.

"The Alevi faith should be recognised. Compulsory religion classes should be lifted and the cemevi should be acknowledged as a place of worship," Balkiz said.

"The Alevis were forced to hide their faith and were persecuted. They must come out of the closet."

Since it came to power in 2002, the AKP, the moderate offshoot of a banned Islamist movement, has fervently advocated religious freedoms, pressing notably for the abolition of a ban on the Islamic headscarf in universities.

But Alevis have benefitted little from the government's drive and their principal demands remain unanswered.

According to media reports, the government agency supervising religious affairs has even designated as a "threat" Alevi demands to end compulsory religion classes in schools.

In one notable gesture, the government last month expropriated the Madimak Hotel in Sivas. Islamist fanatics torched the hotel on July 2, 1993, killing 37 intellectuals who had come to attend an Alevi festival commemorating the community's iconic 16th-century poet Pir Sultan Abdal.

Officials are yet to say what the building will become. Alevis press for a museum that would expose their suffering, but the local governor has been reluctant, citing fears of rekindled tensions.

"Madimak must become a museum... The wounds (of the torching) are still open and it should not be forgotten," Albayrak said.