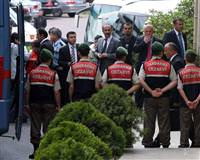 Some 200 soldiers, among them senior commanders, go on trial Thursday in a landmark case in Turkish history to answer charges of a 2003 plot to topple the Islamist-rooted government.

The probe has marked the toughest action so far against the once-omnipotent Turkish army, which has unseated four governments since 1960 but has seen its clout wane under the ruling Justice and Development Party (AKP).

Marred by serious doubts over the authenticity of some documents prosecutors rely on, the case has fuelled political tensions and deepened mistrust between the staunchly secularist military and the AKP, the offshoot of a banned Islamist movement.

For supporters, the probe is a long-due push to force the generals out of politics and under civilian control, while opponents say it is a deliberate campaign to disable the army and remove a major stumbling block for AKP ambitions to Islamise Turkey.

The 196 suspects risk 15 to 20 years in jail for "attempting to overthrow the government or prevent it from carrying out its duties through the use of force and violence."

They include both serving and retired officers, among them acting generals and admirals as well as the ex-chiefs of the navy and the air force.

The prosecution argues the coup plan, codenamed "Operation Sledgehammer," was drawn up and discussed at the First Army base in Istanbul shortly after the AKP came to power in November 2002 amid fears it would undermine the secular system.

It says the suspects planned to "pave the way for a military takeover by plunging the country into chaos and unrest" and singles out the First Army's then commander, retired general Cetin Dogan, as the mastermind.

The soldiers allegedly plotted to carry out false-flag bomb attacks on two Istanbul mosques and down a Turkish jet over the Aegean to provoke tensions with Greece, hoping to discredit the AKP and garner public support for a coup.

Following the coup, the army would take over key posts and set up a "national consensus government" that would eventually hold elections, according to the indictment.

Dogan has denied the charges, arguing that papers from a seminar on a contingency plan based on a scenario of tensions with Greece and Islamist unrest at home have been doctored to look like a coup plan.

The seminar, held in March 2003 at the First Army base in Istanbul, was attended by officers serving in the city and neighbouring regions.

The plot was first reported in January by the Taraf newspaper, which said that an anonymous source had brought the documents -- papers, CDs and audio tapes -- in a suitcase.

The daily, which routinely targets the military, handed over the documents to prosecutors, prompting a large-scale police operation in February.

The audio tapes reportedly reveal that soldiers who attended the seminar spoke of a growing Islamist threat and discussed martial law and a new government, issues not supposed to be on the agenda of the gathering.

But analysts have cast doubt on other evidence, especially a series of anachronistic expressions in some papers, suggesting that some documents may be an outright fabrication.

In one striking example, a colonel accused of having attended the seminar has said he was on an overseas duty at the time and that his middle name which appears in the papers was not officially registered until 2007.

Critics point also at a list of entities the coup plotters planned to control which features associations and hospitals that either did not exist or had different names in 2003.

Some have questioned how the officers could have planned a coup with army units based only in the Istanbul region.

Dozens of suspects, among them soldiers, academics and journalists, are already on trial as part of a separate probe into a purported secularist network accused of having planned bombings and assassinations to destabilise the AKP and prompt a military coup.