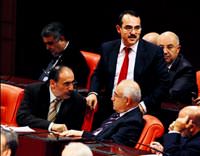 Turkey's justice minister says a state board has voted unanimously to remove a head judge from a case in which nearly 200 active and retired Turkish officers will stand trial this week on charges of plotting to overthrow the Islamic-rooted government.

ANKARA, Turkey - (AP) Sadullah Ergin said Wednesday the board on Tuesday also removed another head judge who oversaw the trial of the 2007 killing of ethnic Armenian journalist, Hrant Dink.

Newspapers say both judges were probed for some controversial decisions, including the release of a drug suspect from jail.

The coup trial starts Thursday under a new judge. More than 400 people, including soldiers, are already on trial in a similar but separate case. The government denies allegations that cases are politically motivated.
Last Update: Dec 15, 2010 5:13 pm
RELATED TOPICS