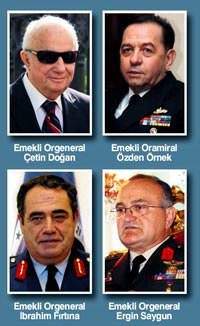 Turkey is preparing to put nearly 200 active and retired Turkish officers, including former chiefs of the air force and navy, on trial for allegedly plotting to topple the Islamic-rooted government in 2003.

The trial begins Thursday at a special court house in the town of Silivri, near Istanbul and marks the government's increasing confidence in confronting a military that once held sway over Turkish political life.

Prosecutors have not made public any evidence or details of the accusations, but the Taraf newspaper has published what it calls leaked copies of documents pertaining to an alleged conspiracy dubbed "Sledgehammer."

The alleged plans include blowing up at least two major mosques during Friday prayers; assassinating some Christian and Jewish leaders; and shooting down a Turkish warplane and blaming it on Greece, the country's historic rival.

Taraf says the conspirators hoped the chaos would lead to calls for a military takeover, and planned to turn stadiums into open-air prisons capable of holding tens of thousands of detainees. The paper says it has provided the documents to prosecutors, who are using them in their case.

The military, which has overthrown three governments since 1960 and pressured an Islamic-led government to step down in 1997, has denied such a plot, saying documents used as evidence were from a military training seminar during which officers simulated a scenario of internal strife.

Unable to independently assess the evidence, Turks remain divided on the authenticity of the plot and the threat it may have posed. What is clear, however, is that the balance of power in Turkey has tipped significantly in favor of civilian authorities, whose arrests of high-ranking military officers would have once been unimaginable.

In late November, the government dismissed three high-ranking officers, two major generals and a rear admiral, from duty pending the outcome of the trial, which could take at least a few years.

Also among the suspects is the former head of the country's National Security Council, once a powerful group of top military officials that exerted strong pressure on the government to follow a strictly secular line, including conducting close surveillance of radical Islamic movements. Prime Minister Recep Tayyip Erdogan's government has dramatically curbed its powers since coming to power in 2002 and turned it into a merely advisory body on security affairs.

All 196 suspects are free pending trial and it is not clear how many of them will attend Thursday's session, during which the court will ask every suspect to identify himself. Some officers face up to 20 years in prison if convicted.

Justice Minister Sadullah Ergin said Wednesday that a state judiciary board voted unanimously this week to replace the head judge of the court that will oversee the trial because of an ongoing disciplinary probe related to other cases.

More than 400 people - including academics, journalists, politicians and soldiers - are already on trial on separate charges of plotting to bring down the government. That case focuses on a conspiracy by an alleged gang of extremist secular nationalists called "Ergenekon," the name of a legendary valley in Central Asia believed to be the ancestral homeland of the Turkish people.

Critics say the cases are built on flimsy evidence and illegal wiretaps, and are designed to silence Erdogan's pro-secular opponents. The government denies the cases are politically motivated.