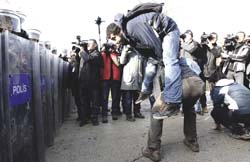 ANKARA: Riot police sprayed the students with tear gas and blocked roads inside the Middle East Technical University campus in Ankara to stop protesters from marching to a building where Prime Minister Recep Tayyip Erdogan chaired a meeting of a scientific agency, the agency said.


Some students hurled stones and eggs at the security forces.


"We cannot condone the [police] violence … We see the prime minister's decision to hold his meeting here as a provocation," said Ali Gokmen, the head of a lecturers' association at the university, according to Anatolia.


Heavy-handed police response to recent protests in Istanbul and Ankara have fueled charges that the ruling Islamist-rooted Justice and Development Party (AKP) is growing authoritarian and seeking to silence opposition.

On December 4, truncheon-wielding police hit and kicked students gathering in Istanbul to demonstrate against Erdogan and call for university reform, causing a young pregnant woman to miscarry.


The clampdown unleashed a torrent of criticism but Erdogan defended the police, accusing the students of links to underground groups and blasting extensive media coverage of the events.


Only days later, students at Ankara University pelted a visiting AKP lawmaker with eggs, after which riot police stormed into the building and dispersed the students with pepper gas.


Student anger at the government has grown since last month when 18 youths were given suspended jail sentences for staging an "unauthorized demonstration" when Erdogan visited the Istanbul Technical University in 2008. – AFP