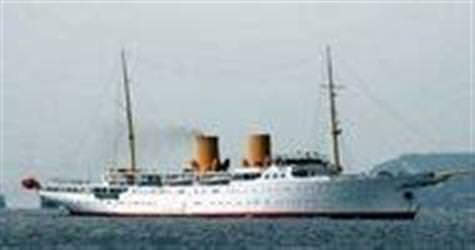 The late founder of modern Turkey met Cabinet ministers and hosted foreign envoys aboard the MV Savarona, one of the world's largest yachts, shortly before his death in 1938.

ANKARA, Turkey -Generations later, according to prosecutors, the luxury vessel played host to an illicit side of life as the stage for an international prostitution ring whose alleged ringleaders went on trial Monday.

One of the suspects Tevfik Arif, a Kazakh businessman, is accused of financing a sex party aboard the MV Savarona, the yacht that was once used by Mustafa Kemal Ataturk, a former army officer and war hero who founded the Turkish state after the collapse of the Ottoman Empire in the early 20th century.

Arif denied the accusations and was released pending trial along with four other suspects, Anatolia said. The court ordered them not to leave the country and adjourned the trial until Feb. 18.

Turkey deported nine Russian and Ukrainian women, including two minors, after authorities said they busted a prostitution ring aboard the MV Savarona in late September.

After the raid, Turkish government authorities said the lease of the 446-foot (136-meter) yacht, will be cancelled and the white vessel will be turned into a museum.

The agency report said the indictment alleges that Arif bankrolled the party aboard the yacht, which has 17 luxurious suites in addition to the master suite.

"He is someone who paid for all fees for the women, the agencies and men in the middle and the transfer of foreigners involved," Anatolia quoted the indictment as saying.

The prosecutors have alleged that Arif organized the parties for prominent foreign businessmen in Turkey to secure business deals.

The businessman, who said he had partnerships in the United States, Britain and Turkey, called the charges "imaginary."

The Turkish government bought the yacht in 1938, the same year Ataturk died. The former leader spent six weeks on the MV Savarona, where he chaired Cabinet meetings and hosted some foreign dignitaries.

A prominent Turkish businessman leased the yacht for 49 years in 1989, the Turkey tourism ministry said. The ship was later sub-leased to different customers.

Turkish President Abdullah Gul spent a few hours on the yacht off Antalya in the summer of 2009 when he hosted the president of Turkmenistan.