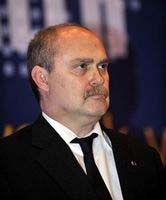 Israel on Monday rejected Turkish objections to a deal between the Jewish state and Cyprus saying the economic agreement was a bilateral issue and Ankara had no reason to get involved.

"This agreement is an issue between Israel and Cyprus and it in no way affects a third country," foreign ministry spokesman Yigal Palmor told AFP. "We do not see how a third country would have anything to say about it."

His comments came after Ankara summoned Israel's ambassador Gaby Levy to the foreign ministry to discuss the deal, which defines the sea border between Cyprus and Israel and delineates an exclusive economic zone between the two countries.

It will allow the two nations to move ahead in the search for energy sources in the eastern Mediterranean and is part of Cyprus's efforts to uncover undersea oil and gas deposits.

The divided island nation has already concluded similar agreements with Egypt and Lebanon, which Ankara has urged the Arab nations to put on hold.

Turkey refuses to acknowledge the internationally-recognised Greek Cypriot government in the south of the island, which signed the agreement, and has no ties with it.

Ankara is the only capital to recognise the self-declared Turkish Cypriot statelet in the north.

He argued that "such unilateral moves (on behalf of the Greek Cypriots) that ignore the will of the Turkish Cypriot side will harm ongoing settlement talks on the island," the report said.

An Israeli official who spoke on condition of anonymity accused Turkey of "monstrous chutzpah" for using "as an argument its occupation of the northern part of Cyprus to denounce the deal."

But Israeli lawmaker Avi Dichter, a former internal security minister and a member of the opposition Kadima party, urged the government to behave with "intelligence."

"Israel has a lot more to lose in a crisis with Ankara. The main flight path from Israel to Asia passes through Turkey," he said on Israeli public radio.

Turkey's criticism of the agreement comes as relations with the Jewish state remain strained over a deadly May 31 Israeli raid on a flotilla of aid ships trying to break the blockade on the Gaza Strip.

Nine Turks were killed in the raid, causing a deep crisis in previously strong ties between Israel and Turkey. Ankara has demanded Israel apologise for the incident and compensate the families of those killed.

Turkey's criticism of the deal comes as Israeli and US companies are preparing to exploit a gas field in the Mediterranean near Haifa with an estimated eight billion cubic metres (260 billion cubic feet) of reserves.

Another area which could hold even larger reserves is being surveyed nearby.