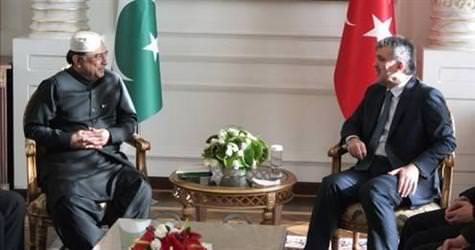 Turkey, Afghanistan and Pakistan will hold joint military exercises as part of efforts to build trust between Kabul and Islamabad, the Turkish president said Friday.

ISTANBUL (AP) - The maneuvers will be staged in April, said President Abdullah Gul at the end of a fifth round of Turkish-sponsored talks aimed at reducing tensions between Afghanistan and Pakistan over militant attacks along the countries' lawless border.

Gul gave no further details but a Turkish government official involved in the talks said the exercises would be staged in Tuzla, 50 kilometers (30 miles) south of Istanbul. He was not authorized to speak to reporters and asked not to be named.

Gul, addressing journalists at a joint news conference with Afghan President Hamid Karzai and Pakistan's Asif Ali Zerdari, also said there had been movement toward closer cooperation between the two nations' intelligence services in combatting terrorism.

"The best way is no doubt through the joint collaboration of the intelligence agencies," Gul said. "I was happy to see that there has been progress in these issues."

"These are very positive, beautiful developments and we are happy about these developments," he said.

Turkey has close ties to both Afghanistan and Pakistan and has been working to bring the two countries together.

Earlier, the three leaders oversaw the signing of several deals, including one for anti-narcotics cooperation between their police forces. They also agreed to the establishment of a video conference line, which they said would support increased dialogue.

Responding to a question, Karzai said he had discussed with "dignitaries close to the Taliban movement" the possibility of the group opening a facility in Turkey or another country "in order to facilitate reconciliation" between Afghanistan and the Taliban.

"If Turkey can provide such a venue, we would be pleased for such a facility to take place in Turkey," Karzai said.

Gul did not address the issue directly but said Turkey was ready to contribute to initiatives that would help stability and security in Afghanistan and Pakistan.