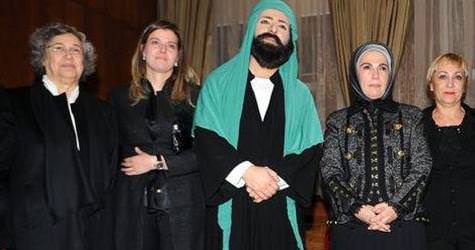 Prime Minister Erdoğan's wife Emine Erdoğan was accompanied by other ministers’ spouses to watch a showing of the play Kerbela, which deals with the historical Battle of Karbala. After the show, Erdoğan said; “I held it all in for awhile, but in the end I couldn’t take it.”

Prime Minister Recep Tayyip Erdoğan's wife Emine Erdoğan was unable to hold back her tears during a showing of the play Kerbela, which she saw with her daughter Sümeyye Erdoğan and 18 ministers' wives. After the almost three-hour-long play at the Ankara Opera House, Emine Erdoğan told journalists that she was unable to hold back the tears."
Amongst those who accompanied Emine Erdoğan at last night's showing was Minister of Culture and Tourism Ertuğrul Günay's wife Gülten Günay as well as Sare Davutoğlu, Zeynep Babacan, Gülten Çiçek, Semiha Yıldırım and Beyhan Bağış to name a few. After the show Emine Erdoğan stopped by the protocol hall to offer her congratulations to the play's leading stars.
'IT WAS VERY EMOTIONAL'
When journalists mentioned that everyone left the theater in tears and asked Emine Erdoğan what she thought of the play, she stated; "I held it all in for awhile, but in the end I couldn't take it. It was really very emotional. This atrocity which took place 1,370 years ago… the heart wishes that this had never taken place in this world. May these events act as a lesson. I hope that a lesson is learned from this. God willing there will be an end to this throughout the world and in our country. I congratulate the friends who acted on stage. They put forth a very good play."
The Battle of Karbala took place in the year 680 in Karbala, which is now in present day Iraq. The Battle of Karbala, in which the Prophet Mohammad's grandson Prophet Huseyin is murdered, is considered to be one of the most tragic events to have ever occurred in the history of Islam. During the month of Muharrem, a number of events are held in remembrance of the tragedy that took place in Karbala.