Turkish president rules out official use of Kurdish language 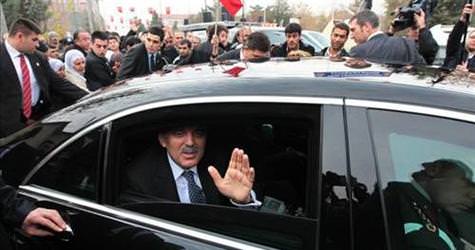 Turkey's president ruled out the use of the Kurdish language in official business on Thursday, a day after the country's civilian and military leaders rejected the minority's demands for autonomy.

Kurdish politicians and activists have been aggressively promoting official use of Kurdish in recent months as part of their growing demands for regional autonomy - a goal shared by rebels whose fight has killed tens of thousands of people so far.

The pro-Kurdish Peace and Democracy Party, buoyed by steps taken by the government in expanding the use of Kurdish, including radio and television broadcasts and letting politicians campaign in the language, insist on regional autonomy. Their demands have fueled nationalist sentiment and tensions threaten to derail efforts to end the armed conflict.

President Abdullah Gul travelled to Diyarbakir, the largest city in the Kurdish-dominated southeast, Thursday and cautioned against exploiting the issue.

"The official language of the Turkish Republic is Turkish, and it will remain as it is," the state-run Anatolia news agency quoted Gul as saying. "Separately, the language of the state and public institutions is Turkish too; it is our common language."

Gul spoke during a meeting with the city's pro-Kurdish mayor, Osman Baydemir, who is a proponent of more Kurdish rights and autonomy demand. He said Kurdish and other minority languages were part of the country's cultural wealth and are safeguarded by the constitution.

"We should see all our differences as our richness and work together in constructive way to make our country stronger," said Gul.

"The core problem is the use of rights as a human and a people," the Anatolia quoted Baydemir in a speech during the meeting at the municipality building. "The lack of tolerance toward demands and suggestions by Kurdish politicians on the mother-tongue and democratic autonomy is a source of concern."

Baydemir said peace can only be reached through dialogue and consensus.

The country's National Security Council responded to Kurdish demands bluntly on Wednesday, saying the country was indivisible and that no attempt at challenging the official Turkish language will be accepted.

"We cannot allow any attempt to deny that the official language of the Turkish Republic, which symbolizes common grounds such as one flag, one nation and one land is Turkish," said the website of the presidential palace, citing the Council statement.

The pro-Kurdish party had expressed hope Wednesday that Gul's visit could "lead the way to education in the mother tongue and the use of Kurdish in public areas, and for our people to freely govern itself within the reality of Turkey."

The party has strong electoral support in the southeast and has been pushing for autonomy in the run up to general elections next summer. Several predecessors of the party have been shut down by Turkey's top court on charges of ties to the Kurdistan Workers' Party or PKK, a rebel group labeled terrorists by the West. The current party is being investigated on similar grounds.

Private courses in Kurdish are available, but the language is not taught in schools. Turkey's constitution says the official language is Turkish and prosecutors are opening investigations into direct challenges to the law. In the eastern town of Erentepe in Mus province, Kurdish authorities have posted dual-language signs at the mayor's office.

Gul was also welcomed by posters in Turkish and Kurdish on Thursday, television reports said.

The Kurdish language debate heated up in November, during the trial of dozens of Kurds, including elected mayors, on charges of having links to the PKK. The court refused the suspects' demand to defend themselves in Kurdish, on grounds that the defendants were fluent in Turkish.

Kurdish rebels have threatened to increase attacks on Turkish targets if Turkey does not agree to Kurdish demands.

The clashes reduced to a trickle after Turkey initiated communication with imprisoned rebel chief Abdullah Ocalan. Harsh winter conditions in the mountainous region usually affect the movement of the rebels as well.

Turkey has never agreed to any of the numerous rebel truces and the military said on its website that two Kurdish rebels were killed in a clash earlier this week, days after they killed a sergeant in an attack in the southeastern province of Mardin.