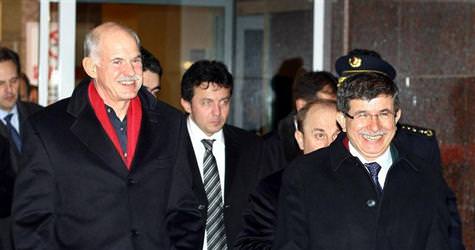 Immigration is likely to feature highly in talks during Greek Prime Minister George Papandreou's visit to Turkey on Friday after Athens unveiled plans for a fence to stem a wave of immigrants across the Turkish border.

Awkward issues ranging from territorial disputes to the division of Cyprus, which have long dogged relations between the NATO allies, have not stopped Turkey offering Papandreou an unusually warm welcome.

Ankara has invited Papandreou to address a conference of Turkish ambassadors being held in the eastern city of Erzurum, and he will also attend the opening ceremony of the World Winter Student Games with his Turkish counterpart Tayyip Erdogan.

"Every year we have foreign guests on our ambassadors conference. Mr. Papandreou was invited this year as a sign of improving Turkish-Greek relations," a Turkish foreign ministry official said.

"We are not expecting a sensational statement on the current situation of the ties. However...there may be announcements if any new agreements are reached," he said.

The issue of immigration was expected to be prominent in talks after Greece said this week it was planning a 12.5 km (8 mile) fence at its Turkish border to avert a wave of immigrants.

"We are pushing for more cooperation from Turkey and for more European involvement because Greece right now is the buffer where illegal migrants enter the EU," said Greek Foreign Ministry spokesman Gregory Delavekouras.

"The prime ministers discussed it the last time they met, this issue is on the table," he said.

Athens has long complained that Turkey is not doing enough to stop illegal migrants and that Ankara's refusal to take back immigrants who have crossed from its territory encourages would-be migrants to use that route.

Friday's visit is seen as an opportunity to build on improving ties between the long-fractious neighbours.

Rapprochement between the two countries, which nearly went to war over a deserted Aegean islet in 1996, was encouraged at the end of the 1990s after devastating earthquakes engendered a spirit of cooperation.

Relations have been boosted by Greek support for Turkey's European Union membership bid, which has moved slowly since talks began five years ago and the improvement in ties was illustrated by Erdogan's visits to Greece last year.

However, strains remain over the division of EU-member Cyprus, territorial rights in the Aegean Sea and overflights by military jets in the region.

Delavekouras said the issue of Turkish military overflights in the Aegean region would be under discussion.

"It is a practice that undermines the whole process of trying to bring the countries closer, this is why we want to see a change in the attitude of Turkey on this matter," he said.

Turkey's long-standing disputes with EU member Cyprus also remain a stumbling block in relations with Greece as well as in Ankara's bid to join the bloc.

Last Friday Turkey's foreign ministry denied a media report that Ankara had agreed with the EU to open its ports to Greek Cypriot ships in a deal to advance its EU accession process.

Turkey has refused to open its ports to Greek Cypriot vessels until the EU ends the isolation of northern Cyprus, which separated from the south in 1974 after a Turkish invasion triggered by a brief Greek-inspired coup in Nicosia.