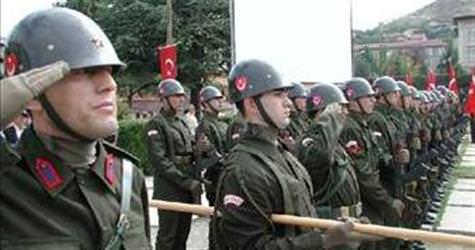 SABAH has acquired the latest details on the new era for professional soldiers in the Turkish Armed Forces, as stated by the Minister of National Security Vecdi Gönül at the Council of Ministers:

In the new arrangement for contracted soldiers in the military, an emphasis is being placed on the length of terms of duty served. With shorter terms, the new model's objective is to have young and dynamic troops serve out in the mountains. According to the information released by Gönül at last Monday's Council of Ministers, the terms granted to private soldiers have been clarified. Once a soldier has completed his mandatory military service, they will then have the option to serve as a private for at least three and at most seven years. The draft, which was prepared with close consideration to the risk of unemployment once they are discharged, includes an age limit for privates, which will allow them to go on to become public servants.

The following is the latest model of the new arrangement for contracted privates:

29 YEAR AGE LIMIT: An age limit will be now be applied for contracted soldiers whom have finished their task duration. In order to allow for the opportunity of privates becoming public servants, which they must do by the time they are 30, contracts will be revoked when privates reach 29 years of age.

ANNUAL 10,000 TL BONUS: Stipulations are that every private completing their terms of duty will receive 10,000 TL each year as an annual bonus. Accordingly, privates that sign on to serve for seven years will receive a total of 70,000 TL in annual bonuses. There are some concerns by the Ministry of Employment and the Treasury regarding this item however. The fact that they may receive 70,000 TL in seven years brings to the forefront the reality that a number of public servants are unable to make that much in 30 years, which has resulted in principles of equality and justice being laid to the table. Therefore, there may be some adjustments made to the item dealing with annual bonuses.

PRIVATE GUARDS OR SECURITY OFFICERS: Two options will be offered for privates whose terms of duty have come to an end. After having participated in the struggle against terrorism, privates will then be able to be employed as either private security guards or may replace the gendarmerie as prison guards.

BACHELORS WILL BE SELECTED: Privates that want to serve in the mountains will be required to be elementary school graduates. In addition, they will be subjected to a written and physical exam. Bachelor privates will primarily be selected for operations.

THREE-MONTHS TRAINING: Those that are accepted as contracted soldiers will then receive three months training at the Isparta Mountain and Commando School. They will only be appointed to their units once they have completed the mandatory training.

10,000 PRIVATES TO BE HIRED: In the initial stage, employment will be granted to 10,000 contracted soldiers.