Suspect suggests a bribe during a raid for bribery 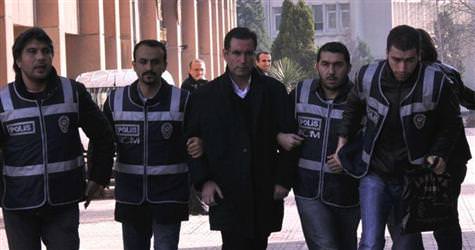 A customs terminal manager suggested his wife offer a bribe when she called him to let him know police had arrived to take him in on charges of bribery.

Police forces stormed in on Cargo Terminal Department Chief Hayrettin E.'s home in an operation on bribery initiated by Prime Minister Erdoğan's orders. When his wife called him to tell him what was happening Hayrettin, who was on duty at the time, gave an outlandish response. "Give the police officers some money and they will leave." Meanwhile, footage shows that Ataturk Airport Cargo Terminal Manager Hayrettin was busy taking a bribe at that exact moment.
Suspected of allowing smuggled goods to pass through customs, Atatürk Airport Cargo Terminal Manager Hayrettin E. supposedly told his wife to offer police officers a bribe when they came to arrest him. The fearless words in the suspect's last telephone conversation before his arrest were recorded as part of an ongoing operation started by Istanbul's Department of Finance into bribery and other illegal activities. The operation, which extends all the way to Istanbul Customs and Enforcement General Director Lütfi Ekinci, was initiated last Friday by Department of Finance police officers by order of Prime Minister Erdoğan.
The operation consisted of a series of simultaneous raids on address that had been compiled on a list over the past six months. One of those addresses belonged to Customs Manager Hayrettin E., who is suspected of having arranged bribes reaching the millions. At the time of the raid, Hayrettin E. was on duty at the Istanbul Ataturk Airport. His wife, who was at home, called Hayrettin E. to tell him police officers had come to the house asking for him. Her husband's response, which was recorded as part of the operation, was; "There is no problem, don't worry. Give the police a little money and they will leave."
CAUGHT WITH 20,000 TL
Having attempted to pay off police officers through his wife, Hayrettin E. was later arrested at his place of work at the Istanbul Atatürk Airport. According to police records, footage reveals that immediately after Hayrettin E.'s wife called him to inform him of the police officers' arrival, the customs manager proceeded to accept money from a customs broker, nicknamed 'Çantacı' (The bag man), who supposedly distributes bribes. On that very same Friday, also the day of collections, Hayrettin E. was detained holding an envelope containing 20,000 liras.
The bribery and smuggling ring, which stems all the way to Istanbul Customs and Enforcement General Director Lütfü Ekinci, has supposedly reached up to 200 million TL in damages to the state.
MONEY STEMS FROM FOUR BRANCHES INTO THE POOL
According to allegations, the pool of briberies was being filled by four different branches: warehouse officials and employees, customs brokers and staff, companies involved in smuggling and inspection and enforcement officers.
Supposedly in 2009, Istanbul Customs General Director Ekinci paid a visit to the Police Department Assistant Chief requesting advice on how to handle the prevention of smuggling through customs. According to recorded footage however, in October of last year Ekinci was seen receiving $6,000 from a customs officer in a restaurant.
Also according to claims, Customs Smuggling and Narcotics Department Chief Coşkun C. warned his team that they were under surveillance by stating, "Police are listening in on all of us and are recording footage."
In August, auditors Muhammet Ali Baylan and Murat Kahraman submitted a four-page report to the Prosecutor's Office regarding bribes and other illegal activities. In the report, State Minister in Charge of Customs Hayati Yazıcı is listed as a complainant.
QUESTIONING CONTINUES…
As a result of a six-month operation centered on the Istanbul Atatürk Airport as well as directed at a number of customs employees throughout the city, Istanbul Department of Finance police officers have arrested a total of 34 suspects, 24 of which were customs employees and 10 which were customs brokers. Police are currently questioning the suspects and they are expected to be transferred to the judicial court tomorro