“Everyone else can remain quiet, but we will not” 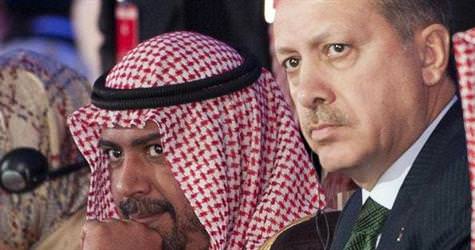 Upon receiving the ‘2010 Islamic World ‘Outstanding Muslim Personality’ award in Kuwait, Erdoğan issued harsh criticism against Israel in an address, stating, “You go and commit piracy and kill nine of our brothers and we are not going to react, is that right?”

During his stay in Kuwait, Prime Minister Tayyip Erdoğan was the recipient of the 'Outstanding Muslim Personality' award granted by the Sheikh Fahad Al-Ahmad International Charity Award Board. During an address at the awards ceremony, Prime Minister Erdoğan stated; "We will never submit to an order in which tyranny prevails in lieu of the law." Relaying that the following words were once spoken to him, "Fine, let the children die in Gaza, let the blockade continue, let there be piracy on the Mediterranean, let others come out to stop people attempting to deliver humanitarian aid, and let them kill nine people, but you go ahead and act as if you haven't seen or heard the news." Erdoğan stated, "Even if everyone else remains quiet, we will not."

PM Erdoğan went on to deliver the following messages:
"When the occupation in Kuwait came to an end, we were rejoiced just as much as the Kuwaities. True fraternity is like that. Just like when a wound affects the entire body if it is infected, the same goes for if there is any problem in our region, it then disrupts the entire region. Some make the mistake of questioning or criticizing us for reacting to the suffering experienced in our surrounding geography.

Fine, let the children die in Gaza, don't you say anything. Let the blockade continue, but you don't see it. Let there be piracy ion the Mediterranean, let people raid a ship filled with humanitarian aid and martyr nine, but you don't hear it. There are plans for Jerusalem, but you don't listen. Remain impassive regarding Baghdad. Don't feel Darfur. This is what they say to us… The entire world is silent, complacent, nonreactive, they don't hear and they don't feel. So they say, 'you too remain silent.'
WE WILL NOT STAY SILENT
For the love of God, is soemthing like this even possible? You are going to go ahead and inhumanely slay my brothers in Palestine and we are going to remain silent, is that so? You are going to conduct piracy in the Meditteranean, attack our aid ship and martyr nine of my brotherds and we are supposed to remain unreactive, is that so? Everyone can remain quiet. They can remain impassive. But we will not be quiet, we can not be quiet and you can be sure we will not be quiet.
WE MAKE IT OUR CONCERN
We carry a heart, we have a conscience. We are people and we believe in humanistic values. We hold our humanity, our conscience above all else. We will never accept a system in which those who speak loudest are the strongest. Just like how we are concerned about the legal rights of the innocent public in Gaza, Ramallah and Jerusalem, we also worry about the legal rights of the 22 innocent Copts that were killed while worshipping in Egypt. In our understanding, humans are first human and their life, possessions and honor is holy and untouchable.
100 YEARS OF LIES
A huge part of the problem in the region is derived from discord. History penned on approximately 100 years of lies, and hearsay, written in a way to misrepresent the truth has resulted in distancing the people in this region. We are putting an end to this distance, and we must do so. We are breaking the mold and we have to. We are putting an end to the 100 years of longing in this region, and we need to. No one should be disrupted from this approach. We do not envy anyone. We will not envy, but we will love. We will join forces. In solidarity, we will savor our brotherhood. Nobody needs to draw any other conclusions from this convergence."