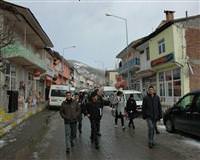 An earthquake, measuring 5.3 on the Richter Scale, rattled Ardahan's Posof district earlier today at 11:17 am.

According to the Bosphorus University Kandilli Meteorology and Earthquake Research Institute, the earthquake's epicenter was located eight kilometers underground and measured 5.3 in magnitude. The epicenter was supposedly located along the fault line with Georgia, in the border Eminbey village in Posof.

Posof Mayor Şükrü Bozyiğit has announced that there have been no reports of death or property loss, however some village buildings have suffered cracks, including one school which recessed for the day.
Ardahan Governor Mustafa Tekmen states, ''There have been no negative reports up until now, however we are still scouring the area."