If elections were held today the AK Party would receive 46.4% and CHP 24.3% of the vote 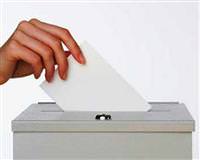 Turkey's ruling Justice and Development Party, led by Prime Minister Tayyip Erdoğan, is well ahead of its rivals in the run-up to a parliamentary election in June, an opinion poll published on Thursday said.

Asked the question, "If the general elections were held this Sunday, who would you vote for," the survey, conducted by pollsters GENAR, showed Erdoğan 's AK Party, had 46.4 percent of the vote, with the main secular opposition, the Republican People's Party (CHP), on 24.3 percent. The Nationalist Movement Party (MHP) had backing from 13.4 percent.
The AK Party, which first came to power in 2002, has overseen a period of unprecedented economic growth in Turkey, a predominantly Muslim country seeking to join the European Union.
Sometimes described as a Muslim version of Europe's Christian Democrat parties, the AK Party won 47 percent of the vote at the last general election in 2007.
Erdoğan says that if he wins another term he will introduce a new constitution to replace the charter drafted after a 1980 military coup.
According to the survey conducted by GENAR, the top three problems in 2010 were listed as the economy, terrorism and the Kurdish issue. The top three events were marked as being the referendum, the raid on the Gaza aid ship and CHP's chairmanship.
SUCCESS IN HEALTH
According to those who participated in the poll, the level of the current government's success in issues ranging from health, education, social aid, economy, foreign policy and democratization ranges between 64.2 and 51 percent. The lowest figure for level of success was at 47.5 percent for the struggle against terrorism. The government's highest success was seen in health at 64.2 percent.
Following is a breakdown of recent opinion polls:
GENAR: AKP: 46.4 CHP: 24.3 MHP: 13.4 Poll conducted on Jan. 5-15 in 17 provinces, based on responses from 2,000 people. No margin of error was available
KONSENSUS AKP: 46 CHP: 26 MHP: 12 Poll conducted on Jan. 4-10 in all 81 provinces, based on responses from 1,500 people. No margin of error was available