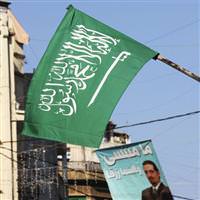 Qatar and Turkey suspended talks on Thursday to resolve Lebanon's political crisis triggered by an indictment into the 2005 killing of Sunni statesman Rafik al-Hariri, saying their proposals had met with "reservations".

It was not clear whether efforts by the two regional mediators had made any progress to break a deadlock which brought down the government of Hariri's son, Saad, last week and revived fears of sectarian conflict in Lebanon.

A political source close to Hezbollah and its allies said the two-day visit by Qatari and Turkish ministers had failed, and their proposals had been rejected by both sides.

But a source close to Saad al-Hariri said it was too soon to declare the talks a failure. "I think the discussions were being approached in a serious and relatively broad manner and the hope continues to be that there will be a resolution," he said, adding he expected some kind of foreign mediation to continue.

The Qatari and Turkish mediation follows efforts by regional powers Saudi Arabia and Syria to end the deadlock.

Saudi Arabia, a close U.S. ally, said on Wednesday it had abandoned its mediation efforts and warned the situation in Lebanon was dangerous, raising the prospect of the country disintegrating along sectarian lines.

A prosecutor in U.N.-backed tribunal on Monday issued a draft indictment over the 2005 killing, which is widely expected to accuse members of Shi'ite group Hezbollah.

The group denies any role in the assassination and says the tribunal is serving U.S. and Israeli interests.

Hezbollah, which is backed by Syria and Iran, and its ministerial allies brought down the government after Hariri, who has Western and Saudi support, refused their demands to cut Lebanon's links with the tribunal.

The political confrontation in Lebanon, which suffered 15 years of civil war from 1975-1990, revived fears of more recent violence when gunmen in 2008 took over parts of Beirut in response to government moves against Hezbollah.

Caretaker Finance Minister Raya Hassan warned this week that prolonged political tension would hurt the economy, and the cost of insuring Lebanon's debt against restructuring or default rose 5 basis points to an 18-month high of 350 points, Markit said.

Consultations to form a new government were postponed for a week on Monday to give regional powers a chance to bring the two sides closer together. But Michel Aoun, a Christian leader allied to Hezbollah, reiterated their opposition to Hariri being nominated to lead a new government.

"Because of some reservations (to the proposals) they have decided to halt their efforts in Lebanon at this time and leave Beirut to consult with their leaderships," said a statement released on their departure.

Sheikh Hamad and Davutoglu held separate talks with Lebanese leaders, including a four-hour meeting with Hariri and a late night meeting with Hezbollah leader Sayyed Hassan Nasrallah, who has lived in hiding since 2006 for fear of assassination.

In comments to Lebanon's Al-Akhbar newspaper published on Thursday, Davutoglu said the situation was now "more positive" than at the start of the week, and suggested there were signs of greater flexibility.