A new era with Argentina 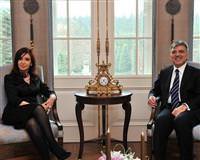 Turkey embarks upon a new era with Argentina after an extended period of tense relations as a result of their stance regarding Turkish and Armenian history. After being greeted by a military procession and a meeting at held at the Çankaya Palace, the two presidential counterparts held a joint press meeting.

President Abdullah Gül and President of Argentina Cristina Fernandez Kirchner, the first Argentinean state leader to pay an official visit to Turkey in 19 years, signed three joint agreements yesterday.
During an address at the signing ceremony, Gül announced that a new page has been opened for Turkish-Argentinean relations.
Gül also brought up Argentina's decision to open up a consulate general in Istanbul. Kirchner, greeted at the Çankaya Palace by a military ceremony, emphasized the completion of 100 years of relations between Turkey and Argentina, and stated that relations will be developed to a further level.
Last night, President Gül held a dinner at the Palace in Kirchner's honor. Prime Minister Recep Tayyip Erdoğan also met with Kirchner at the Prime Ministry. At the close of the meeting, Erdoğan bid farewell to his guest President by expressing his gratitude in Spanish, saying the word 'gracias'.
Argentinean press covers the visit closely…
Kirchner's trip to Turkey has been closely followed by the Argentinean press. Argentinean daily La Nacion calls Cristina's visit a political confrontation and reminds of Prime Minister Erdoğan's cancellation of a trip scheduled for Argentina due to the Armenian diaspora last year.