“We will not impose our personal judgment” 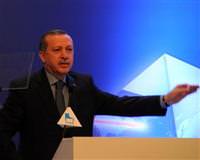 Prime Minister Erdoğan states: In addition to our being conservatives, we are democratic and we display an extremely sensitive stance regarding not imposing our personal judgment on the public.

Prime Minister Erdoğan delivered a number of messages directed to a wide variety of the public during a speech delivered at a meeting held by the Turkish Industry & Business Association, or TÜSİAD.
"We grew up by constantly crashing into rules. The way we lived our lives and our appearance and the way we dressed was constantly interfered upon. Therefore, we would never interfere ourselves in someone else's lifestyle."
"YOU CAN'T SAVE YOURSELF CLAIMING A STATUTE OF LIMITATIONS"
"The recent releases have resulted in bringing questioning the Supreme Council on the agenda once again. You can't save yourself by using, 'the statutes of limitations.' The judiciary is committing a historical sin. There are one million, 600 thousand files in waiting at the Supreme Council. How can this even be possible? We are determined to take certain steps of reform regarding the Supreme Court and the State Council.
COUNCIL OF STATE CRITICIZED FOR UNLAWFUL RULING
Erdoğan also criticized the Council of State decision to halt the Higher Education Board decision to allow students to wear a headscarf during exams. "This decision is unlawful as there are no restrictions regarding dress in the Constitution. This is the true definition of the politicization of the judiciary.