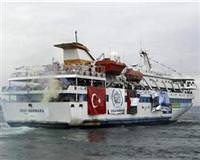 Turkey said on Sunday it was "appalled and dismayed" at the findings by an Israeli inquiry that cleared the Israeli government and military of wrongdoing in a raid on a Turkish aid ship bound for the Gaza Strip.

Turkey said its own panel's report into the May 31 incident, which it submitted to a U.N. inquiry in September, had found that Israel's blockade on the territory and "attack against the humanitarian aid convoy" had violated international laws.

"Our Commission is surprised, appalled and dismayed that the national inquiry process in Israel has resulted in the exoneration of the Israeli armed forces, despite all the facts that have also been confirmed by the International Fact-Finding Mission," Turkey's Foreign Ministry said in a statement.

"Israel's attack against the humanitarian aid convoy, which violated both wartime and peacetime international law, has also trampled all international principles, rules and norms with the manner in which it was conducted," it said.

The statement said Israel's decision to make the panel's findings public before submitting it to the United Nations was "unconstructive" and because of that it had decided to make public its own inquiry.

Nine pro-Palestinian Turks were killed after Israeli marines boarded the Mavi Marmara on the high seas after it ignored orders to turn back.

"While it had the possibility of intercepting the convoy carrying unarmed civilians without causing bloodshed, Israel opted for a course which made loss of life inevitable," Turkey said in its report.

"Instead of employing numerous established means of interdiction such as firing across the bow or disabling the rudder, Israel chose to first intimidate and terrorize the passengers, and then to raid the ships in the darkness with lethal force," it said.

"While Israel should have re-assessed the situation upon the passengers' exercise of self-defense, and had ample time to do so, it chose, on the contrary, to attack with increased violence."

The Turkish report also said: "Israel's so-called 'maritime blockade' against the Gaza Strip is devoid of legal basis and legitimacy."

Muslim Turkey, which had been in alliance with the Jewish state in the past, has demanded an Israeli apology for the raid and compensation over the casualties. Israel has refused.