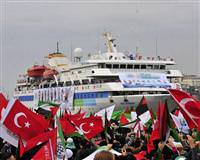 Turkey released details on Monday of its own report into the bloody seizure of a Gaza-bound Turkish aid ship, a day after Israel published contradictory findings that reignited a furious dispute between the two.

Nine Turks were shot dead in the clash on May 31 last year when Israeli marines stormed a flotilla organized by a Turkish Islamist charity, which ignored orders to turn back as it tried to breach an Israeli blockade of the Gaza Strip.

Turkey's report said two of the activists killed on the vessel, the Mavi Marmara, were shot from a military helicopter.

"The Israeli soldiers shot from the helicopter onto the Mavi Marmara using live ammunition and killing two passengers before any Israeli soldier descended on the deck," said the report, published by state-run news agency Anatolian.

"During the attack, excessive, indiscriminate and disproportionate force was used by the Israeli soldiers against the civilians on board," it said.

Israel's Turkel Commission, whose report will form the core of Israel's submission to a U.N. investigation, cleared the Israeli government and military of wrongdoing and said the operation was legal and justified overall, to Ankara's outrage.

It concluded that the Israeli army did not fire any rounds from the helicopter and marines resorted to guns only after their "less lethal" primary weapons failed to drive back passengers who attacked them as they boarded the ferry.

Turkey responded by publishing for the first time details of its report submitted last September to the U.N. investigation.

"We expected the report to say that mistakes were made and disproportionate force was used, but instead the report's attitude almost renders the Israeli soldiers heroes," a Turkish foreign ministry official told reporters.

The report said Israeli forces had terrorized passengers, abusing them physically and psychologically. It said some passengers were strip-searched and sexually humiliated.

"Israel washed the corpses to avoid further examination of the bodies. They painted over bullet holes on the ship. Why would you try to distort or spoil the evidence if you did not feel guilty?" the Turkish foreign ministry official said.

Turkish autopsies found that the nine men had been shot with 9mm bullets, short-range ammunition, though one also suffered a brain injury from a projectile that may have been from so-called "bean-bag" shotgun ammunition.

Both reports delivered contradictory conclusions on the methods used to intercept the flotilla.

"Israel could have tied a rope around the ship's propeller to make it stop, without firing bullets, or it could have used water on activists. It could have blocked the route with its own ships," the Turkish official said.

The Turkel report states the Israeli authorities used less force than would have been permissible under international law, and tactics such as entangling a ship's propeller often pose considerable danger to the vessel and its passengers.

Ozdem Sanberk, a Turkish member of the U.N.'s flotilla inquiry, wrote in the Financial Times on Monday that the two countries, once allies, were now deeply estranged.

"The publication of Israel's official defense of its actions before a United Nations panel is happening in a fashion more likely to open new wounds than heal the breach," Sanberk said.

"An apology for the killings, along with compensation for the dead and injured, would create the basis for a fresh start in relations."

Turkey has scaled back ties and demanded Israel apologize and pay damages for the raid, which caused an international outcry. Israel has broached compensation but refused to admit fault.

Israel had boycotted that panel, calling it biased, but is cooperating with a separate investigation set up by U.N. Secretary General Ban Ki-moon and still under way.