Erdoğan: “I am not a faultless person!” 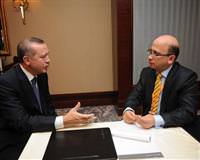 Stating, "if 15,000 files are not handled within the time limit, this means the judiciary in the nation has failed,” Erdoğan also admitted that he has faults too in reference to his words regarding alcohol consumption.

Prime Minister Tayyip Erdoğan lowered the dose of his initial reaction to the debate which surfaced regarding newly implemented alcohol regulations, "I did say that people drink until they snuffle and sneeze. However, that should be perceived as being in my nature or due to the tension of the moment. I am a person too. I have also made mistakes. I am not a faultless man." After his rounds in Ukraine, Erdoğan offered an overview to the Ankara Representatives in which he shared his views on a number of pressing widespread subjects including judicial reform, the new constitution, each party's voter figures and even liberal intellectuals.
'NO MAN IS FAULTLESS'
"The 58th item in the Constitution states that the government will take the necessary measures in order to protect the youth from bad habits spanning from indulgence with alcohol, and addicition to narcotics and gambling." On one hand, we discuss the judicial state and on the other hand, we put aside this clause in the constitution. I am not dealing with these issues because my religion dictates it. The moment we take a step on this issue, we are suddenly branded. They say, 'You are doing this because your religion dictates it so.' Is it also a crime to do what religion dictates? We have never prohibited the consumption of alcohol, or obstructed purchasing it from here or there. And they all know this.' I did say that people drink until they snuffle and sneeze. However, that should be perceived as being in my nature or due to the tension of the moment. I am a person too. I have also made mistakes. I am not a faultless man."
"The Supreme Court, which had previously requested six units, has now taken on the stance of 'let's forget about it.' I can't say 'yes' to the thoughts of the Supreme Court which has one million, eight hundred files in waiting. Furthermore there are approximately 15,000 which have reached the statute of limitations. If in one year, approximately 15,000 files are not handled within the time limit, this means the judiciary in the nation has failed."
(Is the alliance with liberal intellectuals cracking?) I don't hear any such cracks. Furthermore, there is no such alliance. If an alliance developed naturally, that's a different story. If during this period the AK Party government managed to uncover these gangs or certain ugly developments and if their support was a contributing factor, then thanks to them. However, at times we have been placed in very difficult positions. Because, when doing something you need to finalize it, like taking candy from a child. I mean there is no reason for tension to surface in the country. We have to decrease the effects in the market. We are a government that is trying to lead in democracy and economy. This also needs to be considered."
"How is it possible that an intellectual can so comfortably insult their prime minister? How can there be intellectuals that could go so far as to utter the word 'shameless' in addition to other words I can't even repeat? For example, they say; "We'll see you in June." Fine. What if in June the AK Party is once again the sole party in power? Then, you will see. I wonder what you will do then. What threats are you issuing? They make up their own scenarios, well, come and see ours. The nation determines the poll booth results and not words by intellectuals. If the public understands what you say, well then you'll take them behind you and sweep them away."
CHP AND ERGENEKON
"Recently there have been certain efforts made regarding the Ergenekon organization. It's quite significant that the opposition party is trying to seek out an exit strategy on the issue. How can the assistant chairman be a constitutional legist? How can we break through their constitutional law? It's all based on this. They reveal their past in a very nice manner. The Chairman states, "No, there is no such thing. So, there is no saying who's hand is in who's pocket."
"Turkey has caught on to a period of transition into advanced democracy. The reason behind this is the fact that there is a single party in power. If we had not been in power as a single party, we would not have been able to achieve the democratic rights that we have. Take a look at the newspaper headlines and editors commentary. I wonder if eight years ago we were able to write such articles. There are even some who go so far as to insult. How many people have been imprisoned for expressing their thoughts during this period? In the past, you couldn't walk in prisons due to the number of prisoners doing time for expressing their thoughts. Now, the number imprisoned could be listed on one's fingers. That's how far we have come.
We want the constitution's infrastructure to be created by the people, who will say 'this is my constitution.' Spanning from political scientists to economists and even civil society organizations, anyone who says they want to contribute can. After that, at the final point, constitutionalists will bring it altogether under the same roof. We say, let's make a comprehendible constitution after June 12th. After the election we will take a look at what's on the table for the parliament and will begin to meet with groups. Our intentions are to create the constitution through a consensus. We do not want a constitution that is a reproduction. How will we prepare a constitution that is unique to us? Just as how the route of our party's new efforts were determined, the nation will draw the route for us for the constitution."