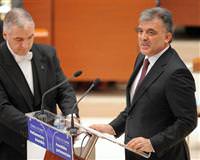 Accession to the European Union is not crucial to Turkey as it continues to face obstacles joining the bloc, Turkish President Abdullah Gul said in remarks published on Thursday.

He said in an interview with French daily Le Figaro Gul that French President Nicolas Sarkozy's image of Turkey did not correspond with reality.

Turkey, which straddles Asia and Europe, entered formal membership talks with the EU in 2005, but a row with Cyprus and reluctance among some EU states to admit the large, relatively poor Muslim country has slowed progress to a near standstill.

"It's clear that obstacles have been placed in front of us, but the world does not stop at the European Union," Gul said.

The bloc is divided over whether to give full membership, with France taking the strongest stand against Turkish entry.

Turkey has rejected a proposal put forward by France as well as Germany, where Turkey would be part of a "privileged partnership" that would also include Russia.

"The strategic choice we have made in its favour (EU) does not stop us developing relations that we have established across the world," Gul said.

Sarkozy travels to Turkey at the end of February to drum up support for his G20 agenda and Turkey's EU membership is also likely to be discussed.

Sarkozy promised in his election campaign in 2007 to stand firm against Turkish accession, citing cultural differences and concern over the bloc's political cohesion.

"I think that he (Sarkozy) has an image of Turkey that does not correspond with reality," Gul said. "It's good that he comes so he can understand the development that Turkey has undergone."