Police go on alarm due to threats to public prosecutor Çolakkadı 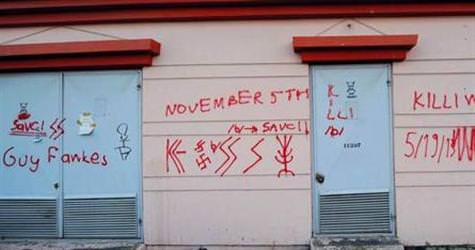 Police are investigating a series of threatening messages written on a power distribution center located near Istanbul Deputy Chief Public Prosecutor Turan Çolakkadı lodging. Çolakkadı is one of the special authority prosecutors overseeing the investigations of the highly controversial Ergenekon and Balyoz cases.

The bizarre graffiti written on an electricity distribution unit located in the vicinity of Istanbul Deputy Chief Public Prosecutor Çolakkadı's lodging was first noticed on January 24th. When the Turkish word for prosecutor 'savci' was written next to other English words, police decided to take widespread security measures and to initiate an investigation into the writings.
Thirty police from a variety of Department units inspected the vicinity. Footage from cameras located in the area was also confiscated. The prosecutor has initiated a crime scene inspection. Çolakkadı confirmed the incident to SABAH, stating; "The police are investigating. I am the aggrieved in this situation. It would not be right for me to say anymore"
Police are considering the written messages may be an assassination threat. The words "SAVCI", "KILLI WAS HERE ", "GUY FAWKES" and "NOVEMBER 5th" as well as other writings, a skull, and a figure resembling a swastika were first noticed by a security detail; however not being able to speak English, the significance of the words went unnoticed. However, when an English teacher translated the terms, the police decided to being investigating. The fact that the perpetrators responsible for the graffiti knew about Guy Fawkes, considered one of the most significant anarchists of all time, and also penned the November 5th date, which refers to the 1605 plans to bomb the English parliament, made the writing that much more attention-drawing, SABAH's Special Intelligence Department captured photos of the ominous writing. The depiction of a skull located next to the Turkish word for prosecutor is especially alarming.