A conversation with the ‘Ghost Rider’ 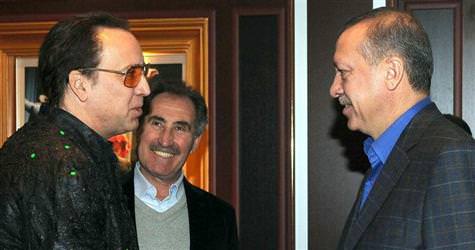 Prime Minister Erdoğan met with Oscar award-winning actor Nicolas Cage who has been shooting scenes for the upcoming Ghost Rider sequel in Pamukkale.

The meeting took place in Denizli's Colossae Hotel and was also attended by Minister of Culture and Tourism Ertuğrul Günay, AK Party Assistant Chairman Salih Kapusuz and Erdoğan's daughter Sümeyye Erdoğan.
During the meeting, Prime Minister Erdoğan welcomed Cage to the country. Cage expressed how much he enjoyed Turkey and how sad he was that he has never been here before.
When Erdoğan asked Cage whether or not he had visited Istanbul yet, Cage stated that he had not but definitely wanted to see both Istanbul and Konya because he was especially curious and wanted to learn more about the 'Sufi experience.'
Expressing that ever since the moment they first arrived in Turkey, all officials have been extremely helpful, Cage said that during his time in Turkey they were able to shoot a good action film.