Coal mine collapse in Acıpayam: 1 dead 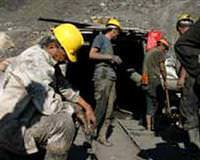 A miner was killed in the collapse of a coal mine in the Karaismailler village located in Denizli’s Acıpayam district.

According to the information obtained, the cause of the collapse in the Karadoru Mine, which is privately operated, has not yet been determined.
Miner Hüseyin Davulcu (38) was stuck under the collapse. Davulcu, whom had sustained serious injuries, was rescued by his coworkers however he passed away en route to the Acıpayam State Hospital.
Davulcu was a father of three.