Do not resist change 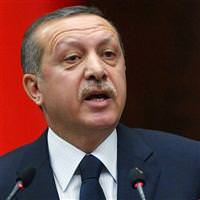 During a group meeting, Erdoğan made a historical call on Mubarak which was televised live on Al Jazeera and was released as ‘breaking news’ by a number of foreign news agencies.

Erdoğan addressed Mubarak with the following words:
"I want to offer a very sincere warning to Mubarak:
• In this day and time, freedoms cannot be postponed nor overlooked.
• Heed the humanistic demands that will put an end to this public outcry.
• Do not hesitate to respond to the concept of change demanded by the public.
• Do not provide the opportunity for dirty focuses or dark scenarios to take initiative.
• Administrations that close their eyes and ears on the public can not be long-lasting.
• These incidents must be put to rest before it causes great suffering."
SUGGESTIONS TO THE EGYPTIAN PUBLIC
Speaking to, 'our Egyptian brothers,' Erdoğan stated the following:
• During this uprising, stay away from weapons however stake claim to your history and culture.
• Only exert a dignified struggle to obtain freedoms.

In all of history, there is no administration that has been able to stay in power through the exertion of pressure, suppression and fear. In every era of history, sooner or later human dignity and pride has worked to break all chains, even if it took time, the oppressed has always broken free. It is for this reason no administration can remain apathetic to basic rights and freedoms. No power can approach the public's demands for democracy insensitively. An administration that closes their eyes, ears and hearts on the public will not last long. No longing or call by the public should remain unanswered. No power can remain standing against the will of the public.

Our fundamental philosophy is based on the understanding of letting the people live so the state can live. We want the same for our comrades as we want for ourselves. I want to provide a very sincere warning and suggestion to Egypt's state leader Husnu Mubarak: We are transitory. Each one of us is going to die and we will have to answer for what we have left behind. As Muslims, we are all headed for a two-meter squared hole. Those who are everlasting will leave behind a nice echo under the heavens, and will be remembered with respect and mercy.

Listen to the public's outcry and heed their humanistic demands. Respond to the public's desire for change without hesitation. You take the first step, in the name of establishing peace security and stability in Egypt, without allowing the opportunity for exploiters, dirty focuses or those creating dark scenarios for the country to take incentive. Take steps that will satisfy the public. In the world of today, freedoms can no longer be postponed. Elections which take months to be held cannot be called democratic. We conclude an election in 24 hours. Our desire is for these events to come to an end immediately before it results in great suffering and for the public's legitimate and reasonable demands to be met.

I am calling out to my Egyptian brothers: During this period of uprising, remain distanced from weapons however stake claim on your history and culture. Do not let this wound you. What I am saying is; exert a dignified struggle to obtain freedoms. This is your most democratic right. Democracy and freedom is not earned, it is a right of humanity. If even a single person, soldier, police or civilian dies in Egypt, in Turley, we lose a part of ourselves. We do not want a single person's nose to bleed in Egypt. As Turkey, we will continue to stand by the public of our brothers Egypt and Tunisia. Our biggest desire is for Egypt and Tunisia to realize reforms and for quiet to be established while ensuring unity and solidarity is definitely not broken.

We believe that Middle Eastern communities will take steps towards a brighter future with further democracy and prosperity. We have never believed that chaos would emerge from democracy. We also never believed that radicalism would surface from democracy. Order and stability can only be established by advanced democracy. Moderation, tolerance and compromise can only be strengthened by advanced democracy. Independent, fair and democratic elections and the will of the nation definitely should not be feared.