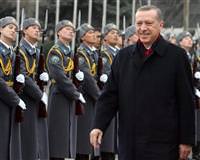 Turkey's Prime Minister Tayyip Erdogan urged Egyptian President Hosni Mubarak on Wednesday to start a transition of power sooner rather than later, a day after Mubarak announced he would surrender power in September.

"It is very important to get over this period with a temporary administration," Turkish state-run Anatolian news agency quoted Erdogan as saying during a visit to Kyrgyzstan.

"People expect Mubarak to take a much different step," said Erdogan, whose country has seen its influence in the Middle East rise in recent years.

Erdogan said he had watched developments in Cairo on television late into the night, and it appeared to him that Egyptian people would not be satisfied until plans for an early transition of power were announced.

"This is the expectation of people. I think this process should start, and its road map and schedule should be announced," said Erdogan. "I don't think it is possible to satisfy the people without a schedule."

In a televised address to his nation, the 82-year-old Mubarak said on Tuesday he would not seek re-election when his presidential term ends in September.

Mubarak's speech angered protesters who want an immediate end to his 30-year-rule, and prompted the United States to say change "must begin now."

Reiterating the need for a handover to a temporary administration, Erdogan said: "The current administration fails to give confidence for beginning an atmosphere of democracy within a short period of time."

On Tuesday, Erdogan told Mubarak he should heed his people's desire for change in the face of massive protests.

NATO-member Turkey is often held up in the West as a model for democracy in Muslim nations. An old friendship with Israel had limited Turkey's influence in the Middle East, until Erdogan's vehement criticism of Israeli policies toward Palestinians in recent years chilled ties with the Jewish state.