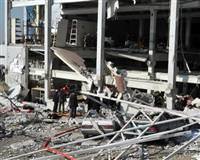 A large explosion in Ankara has resulted in six deaths, and 28 wounded. The blast took place at the Mega Center in the capital’s OSTIM Industrial Complex, and was supposedly caused by a gas leak.

TWO FLOORS OF A FOUR STORY BUILDING COLLAPSE AFTER THE BLAST
The explosion took place in a hydraulics manufacturing factory at 11:00 this morning. The blast, which supposedly originated in the boiler room, was heard in a number of locations throughout Ankara as flames rose from the building where it took place. Supposedly there are 40-50 workers employed at the location and it is suspected that the explosion has resulted in a significant number of deaths and injuries. According to an announcement made by the Red Crescent, two stories of the four-level building collapsed and there are stated to be people trapped under the rubble. Six deaths have been reported thus far and 28 people have been admitted to the hospital, however these figures may rise.
A number of ambulances and firefighters have arrived to the scene of the explosion.