“Do not make us political material” 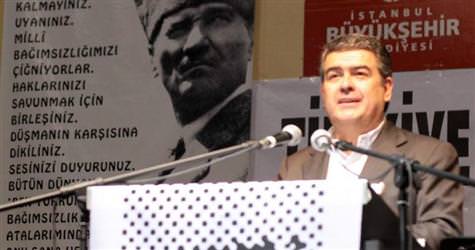 In an announcement released yesterday, the General Staff reacted harshly to CHP’s Batum referring to the Turkish Armed Forces as being a ‘paper tiger’. The General Staff states, “Politicians need to take further heed of the comments they make regarding Turkey’s Armed Forces… Attempts to draw the military into politics are saddening.”

INTERESTING TIMING
The fact that this announcement was made immediately prior to Chief of General Staff Işık Koşaner's scheduled meeting with CHP leader Kemal Kılıçdaroğlu yesterday, was attention-drawing. AK Party's Çelik also commented on Batum's statements by stating, "I would like to express that I find this discourse very distasteful."
The General Staff said, "It is rather saddening to see those politicians who seize every opportunity to say the Turkish military should stay out of politics, are attempting themselves to draw the military into politics."

The four-item announcement by the Turkish Armed Forces requests politicians to pay attention to what they say and states that the military should not be drawn into politics. The announcement goes on to state. "During this period, while the unforeseen future of the instability in our surroundings persists and as the Turkish Armed Forces continues to fulfill their sole duty of security in the best manner possible, to use the military as political material provides absolutely no benefit for our country nor any political outlook."

Responding to the press while Chief of Staff Koşaner- and CHP Chairman Kılıçdaroğlu met, Batum stated that he did not take the TAF announcement personally. Batum states that the term 'paper tiger' was drawn as if with tweezers, from a 30-minute conversation. "The Turkish Armed Forces knows that I will not draw them into politics. There is a psychological movement being made against the military. I simply said that nothing is being down to counteract this movement. If the meaning that the 'military does nothing' was derived from what I said, and I was misunderstood, then I apologize to the honorable members of the military."