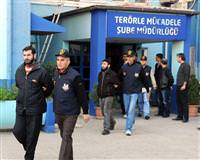 Turkish police have detained 35 suspected members of the outlawed Turkish Islamist militant group Hizbullah near Istanbul and in the country's southeast.

Fifteen members of the group were detained near Istanbul, while another 20 were taken in the towns of Batman, Diyarbakir and Sanliurfa.
The group has no connection with the Lebanese Hezbollah movement.
Hizbullah emerged in the late 1980s during fighting between Kurdish separatist guerrillas and Turkish troops. It killed scores of people, targeting mainly Kurdish separatist rebel sympathisers
Security experts believe the group has mostly disbanded.
Some of its leaders were released from prison in early January after the introduction of new regulations limiting the imprisonment period without convictions.