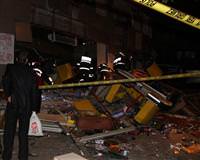 An explosion caused by a gas build-up injured 10 people and badly damaged a shop in the southeast Turkish city of Diyarbakir on Tuesday, security sources said.

The blast caused parts of the three-storey building, located at a petrol station in the city's Baglar district, to collapse, state-run Anatolian news agency reported.

It said the injured were taken to various hospitals in the city and police were inspecting the scene.