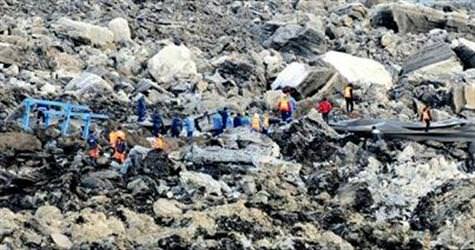 Ten people went missing in a land collapse in the Çöllolar Coal Basin for the Afşin-Elbistan Thermal Power Plant in Kahramanmaraş. One person was found dead, however efforts are still ongoing to reach the remaining nine people missing. On February 6th, a collapse occurred at the exact same location in which one worker was killed.

Both collapses occurred in the same open coal production mine. Thursday's landslide has left ten people, who were conducting inspections of the coal production site after the initial landslide, caught in the rubble. One body was recovered however search and rescue efforts continue for the remaining nine.
Just last Sunday, a land slide occurred in the same location, killing one and wounding ten. A total area of 25 million square meters of land slid trapping 50 trucks and 15 heavy-duty vehicles. The reservoir operated by 160 workers was temporarily closed down. After initial inspection of the area, permission was granted for efforts to study the area and to recover the trapped vehicles.

The second landslide took place on Thursday morning, trapping a number of people who were inspecting the area due to the initial collapse and search and rescue efforts are still ongoing to recover those still missing. The search is being assisted by two General Staff helicopters, and a Mineral Research & Exploration General Directorate, or MTA, team from Ankara. Civilian defense and AKUT teams have joined forces with the MTA team to resume recovery efforts again early this morning. In addition a 100-member technical team of people from Ankara, Adana, Malatya, Gaziantep and Diyarbakır are also continuing to search the area of the collapse. Trained dogs are also being used for search and rescue. The families and close ones of the nine missing are still waiting hopeful for their loved ones safe return.
According to search and rescue teams, the expansive area of the collapse in Kahramanmaraş and the fact that land still continues to slide poses serious risks for ongoing efforts. Nevertheless, the search continues aided by military and district gendarmerie helicopters as well as teams from the Kahramanmaraş Province Natural Disaster and Emergency Situations Directorate and search teams from Adana, Gaziantep, Malatya and Diyarbakır. Teams are being lowered by helicopter to the area of the collapse. The helicopters are also searching for victims by flying low over the area and utilizing radar, electromagnetic waves and inspecting the land's stratum layers. Yesterday, four helicopters and a 100- member professional team joined by two dogs were unable to make any progress. In addition, no signals were received from the victims' cell phones which were being tracked.
REMEMBERING CHILE: WE HAVE HOPE
Turkey's Grand National Assembly Deputy Speaker Nevzat Pakdil, AK Parti Kahramanmaraş Deputy Mehmet Sağlam and Cafer Tatlıbal were at the site and offered comfort to those waiting for their loved one's recovery. Pakdil expressed that their first and primary concern is reaching those citizens trapped in the rubble. "I have been told that the collapse extended over a five kilometer-square radius. Fifty million square-meters of land slid to cover the entire area. We are trying to reach those trapped while also not causing any further landslides. In Chile, people were recovered months later. We are preserving any hope. I hope to God that they are still alive and they will be saved."