Lack of regulation is the problem with totalitarian regimes 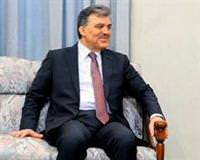 During a discussion with members of the press during his trip to Iran, President Gul heard complains that cellular phone and internet service had been shut down in Iran due to the demonstrations. According to General Secretary Isen, “Our driver, who was taking us to buy books, was beaten.”

Assessing the recent developments in the Middle East, Gül states, "How is it possible, that one manager incurs so much money, while others have unaccounted for expenditures, actions, corruption and theft transpire? It is a result of this absence…"
Emphasizing that the most significant problems of a totalitarian regime is injustices, corruption lack of accountability and underuse of resources, President Abdullah Gül states, "the public protests in the Middle East have transpired as a result of there being no regulating of these types of issues."
President Gül held a discussion meeting at the Espinas Hotel, where journalists covering his trip to Iran are staying.
Gül stated that during his meetings, regional issues were discussed, and he shared that he reiterated a warning that, he had made long before the public uprising against regional leaders, that "they need to clean inside their own homes." Expressing that this is a different era, Gül said, "You may shut down telephones, however the television shows everything. Nothing should be done that is contrary to the public.'' Mentioning that Turkey developed democracy and raised legal standards through the nations' own incentives and dynamics, Gül stated, "Turkey is lifting prohibitions and taboos with their own hands." Reminding that Turkey is currently creating transparent laws, Gül used the Court of Auditors law as an example. Qualifying it as the "most significant reform done in recent years," Gül went on to state the following:

COURT OF AUDITORS LEGISLATION MARKS SIGINIFICANT REFORM
"The most significant problems of a totalitarian regime are injustices, corruption, lack of accountability and underuse of resources. This is happening because there is no consistent regulating regarding these issues in the countries in this region. Otherwise, how is it possible, that one manager incurs so much money, while others have unaccounted for expenditures, actions, corruption and theft transpire? It is a result of this absence."
Noting that the Court of Auditors legislation was a victim of debate, Gül states, "This may be the most significant reform made in recent years. The Court of Auditors has become a whole new Court of Auditors. They may not even be aware of this. I invited them; spoke with them and now, the Court of Auditors will be inspecting everything from public spending to ministries, to the Armed Forces, the police department, the intelligence agency, municipalities and municipality partnerships. Not only will they be inspecting everything, but they will also be conducting performance evaluations. From military facilities to police lodging, to cafeterias… all accounts will be recorded."
TRANSPARENCY INDICATOR
Reiterating that he uses the Court of Auditors legislation as an example of transparency, Gül stated that the demonstrations transpiring in regional countries can serve as a lesson and emphasized that those who take advantage of this lesson will come out of this experience successfully.