No point in EU reforms if Turkey bid doomed 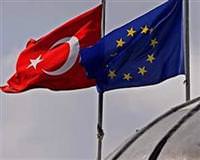 Turkey sees no point in pursuing unpopular reforms aimed at winning membership of the European Union if the bloc has already decided Ankara will never be admitted, a Turkish diplomat said on Tuesday.

The comments, among the bluntest by a Turkish official on a flagging membership bid, underline growing frustration with entry talks. Ankara has previously argued social and political reforms are valuable in themselves to improve Turkey's democracy and investment climate, irrespective of EU membership hopes.

"If membership is not in the cards why should we do (reforms)? What's the point of continuing negotiations. These are very difficult changes for Turkey", the diplomat told reporters in Ankara on condition of anonymity.

Turkish leaders have sounded increasingly impatient with lack of progress in entry talks that began in 2005, though they insist membership remains their top foreign policy goal.

In order to meet 80,000 pages of EU law, Turkey needs to adapt its political, economic and social system, from freedom of expression to agriculture policies and environmental laws.

Many of these reforms are expensive and unpopular among voters and could prove costly for the government with parliamentary elections due in June.

President Abdullah Gul, a long time supporter of Turkey's EU aspirations, in an interview also last month, said EU accession was not crucial to Turkey "because the world does not stop at the European Union."

Helped by a booming economy and growing self-confidence, Turkey has in recent years deepened political and commercial ties with Middle East neighbours, Central Asia and Russia.

Turkey's leaders have accused some EU member states of using the dispute over the divided island of Cyprus to block Turkey's bid and have aired suspicions that some countries do not want a Muslim nation with a large population in the 27-member bloc.

"We have been waiting in line and everybody has passed us in the line," the diplomat said.

Of Turkey's 35 chapters -- or subject areas for negotiation -- one has been completed, 12 remain under discussion and 18 have been frozen because of opposition by EU member states including Cyprus and France.

Turkey fears its bid could soon grind to a complete halt, and the diplomat said he "would not hold his breath" over Turkey's chances of opening this year three chapters left -- public procurement, social policy and competition.

"We are stuck," it's incumbent upon the EU to unglue the situation," the diplomat said