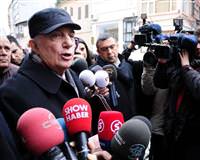 A Turkish court detained a top former general on Monday who is among nearly 200 serving and retired officers being tried over an alleged 2003 plot to destabilise the government.

The case highlights strains between the secularist military and Prime Minister Tayyip Erdogan's ruling AK Party, which critics suspect harbours Islamist leanings, but which describes itself as a conservative democratic party.

General Cetin Dogan, former commander of the prestigious first army, reported to the Istanbul court on Monday after judges had ordered that he and another 162 defendants be formally arrested in the investigation into "Operation Sledgehammer".

Prosecutors say the plot involved plans to bomb historic mosques and provoke conflict with Greece, as part of a plan to undermine the government and enable a military takeover.

Defendants deny any conspiracy and say "Sledgehammer" was simply a war game exercise presented at a military seminar.

Underlining the importance of the trial, the head of the military held talks with Erdogan at the weekend after meeting families of the officers.

Upon his arrival at the court, Dogan criticised the handling of the case.

"The trial is no longer progressing in a legitimate way," Dogan told reporters. "All the documents are rotten," he said, rejecting the evidence against him.

The trial, being held in the town of Silivri west of Istanbul, was adjourned on Friday until Monday and will resume just three months before a national election that is expected to result in the AK Party winning a third consecutive term.

A total 196 officers are on trial, around three-quarters of them still serving. Most have been in and out of detention in the past year.

Police formally arrested 133 officers in Silivri and others have handed themselves in over the weekend and on Monday.

Among those already jailed were former air force commander Ozden Ornek and former naval commander Ibrahim Firtina. If found guilty, they could face 15 to 20 years in prison.

The once formidable power of the military, which has toppled four civilian governments since 1960, has been eroded in recent years under reforms designed to prepare the country for European Union membership.

Hundreds of defendants are already on trial at the same court in Silivri over a series of alleged coup plots allegedly orchestrated by the shadowy Ergenekon network.