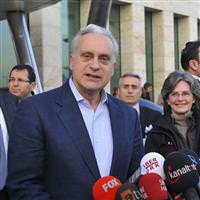 Turkish officials have warned the new U.S. Ambassador Francis Ricciardone against interfering in its domestic affairs after he commented on Turkey detaining reporters despite pledging support for press freedom.

Prominent journalist Soner Yalcin and three colleagues were detained this week and were due to appear in court on Thursday in connection with an alleged plot to overthrow the government.

"On the one hand there exists a stated policy of support for a free press. On the other hand, journalists are put under detention. We are trying to make sense of this," Ricciardone told reporters on Tuesday.

Commenting on the case of Yalcin, owner of a website which is fiercely critical of Prime Minister Tayyip Erdogan's government, he said he did not know what the charges were and that this was a domestic matter for Turkey.

His remarks drew a barrage of criticism from several Turkish officials. Huseyin Celik, deputy chairman of the ruling AK Party, said there was a line that ambassadors should not cross.

"Of course, ambassadors cannot interfere in our internal affairs. They can't design our domestic policy. They have an area designated for them on this subject," he said in comments widely reported by Turkish newspapers on Thursday.

State Minister Egemen Bagis, Turkey's chief negotiator in talks with the European Union, said the United States had itself detained reporters in the past for not revealing their sources.

"The ambassador is very new. His comments about Turkey are not linked to his knowledge and experience, but what he has heard," Bagis was quoted as saying.

"There are journalists in his own country who are in jail for not revealing news sources."

Deputy Prime Minister Bulent Arinc joined the chorus, saying it was a matter for the courts if journalists were involved in illegal activity unrelated to freedom of expression.

"Maybe the esteemed ambassador must serve a bit longer to see this detail," Arinc said.

U.S. President Barack Obama appointed Ricciardone as ambassador to Turkey -- a U.S. ally -- at the end of December.

Turkey has pushed through a series of political reforms with the aim of securing EU membership, but rights groups remain critical of its record on freedom of expression.

Turkish courts are hearing a series of cases on alleged coup plots and journalists are among those detained.

The latest trial of nearly 200 serving and military officers in the alleged "Sledgehammer" plot reflects a lingering mistrust between the traditionally secular establishment and a ruling party that critics say retains Islamist leanings.

U.S. diplomats have come under fire before. Erdogan has accused Ricciardone's predecessors of slander following several cables leaked by the WikiLeaks website. State Department spokesman P.J. Crowley defended the ambassador's remarks during a briefing on Wednesday. He said: "We do have broad concerns about trends involving intimidation of journalists in Turkey, and we have raised that directly with the Turkish government and we'll continue to do so."