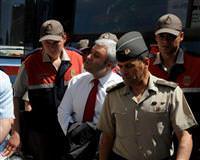 Among the Ergenekon defendants, television station founder and writer Tuncay Ozkan told a court hearing on Friday he would run as a candidate in Turkey's June parliamentary election in the same district as Erdogan.

Another jailed journalist aims to run in the election. "I was brought here because I wanted to be in politics. My political right was obstructed. A non-existent group was created and we were brought here," said Ozkan, who played a prominent role in mass protests against the government in 2007.
"In the election I will be an MP candidate in Prime Minister Tayyip Erdogan's district," he was quoted as saying by state-run Anatolian news agency. He has been held on remand at Silivri jail, west of Istanbul, since September 2008.
He denied that his aim was to secure parliamentary immunity from prosecution.
Opinion polls show Erdogan's AK Party, which first came to power in 2002, is well ahead of its rivals in its campaign to win a third successive term in office.
On the Ergenekon issue, public opinion was behind the government after the first arrests back in 2007, as few Turks want a return to the coups that blighted the country in the late 20th century. Scepticism set in as the investigations broadened and many suspects have been held on remand for more than two years with no end in sight.
The trials reflect a lingering mistrust between the traditionally secular establishment and a ruling party that critics say retains Islamist leanings.
NATO member Turkey has pushed through a series of political reforms with the aim of securing EU membership, but rights groups remain critical of its record on freedom of expression.
The court cases revived debate about press freedom, as thousands of reporters have been investigated over their reports on the Ergenekon plots on the grounds that they violated the confidentiality of the cases.