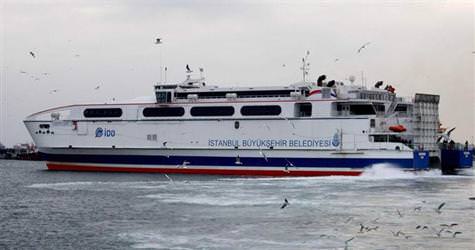 Upon Prime Minister Erdoğan's orders, two ferryboats, the Orhangazi 1 and Osmangazi, have departed to return Turkish nationals from Libya.

According to information obtained from İDO Istanbul's ferry operators with coordination from the Ministry of Foreign Affairs, the Osmangazi, one of the two ferry boats departing for Libya that operate on the Yenikapı-Bursa line, set sail yesterday from the Yenikapı İDO Pier at 13:00. The Orhangazi 1 ferry departed last night at 18:00. Both ferries have a 1,200 passenger and 200 vehicle capacity and in 22 hours from departure they will reach Trablus and Derne. Should the ships be unable to dock at the port, passengers will then be transported to the ferries in smaller boats. The ferry boats will also be carrying 20 tons of aid, consisting of medicine, clothes and water which has been prepared by the District Department of Health and Kizilay (Red Crescent).
The ferries, which have a 40-person crew, sail at 32 miles per hour. Information has also been released that a frigate from the AKSAS naval base will be accompanying the ferryboats. Meanwhile, the General Staff is sending the 1,500-passenger capacity TCG Iskenderun ship, accompanied by two frigates and a fuel ship, as well as provisions for 6,000 has departed from Mersin Port.