Turkey to confront Sarkozy on opposition to EU bid 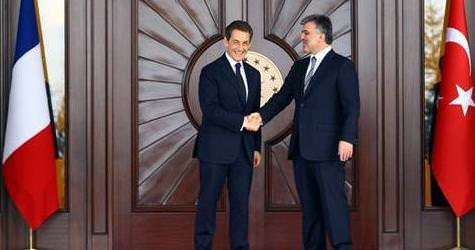 Turkish Prime Minister Tayyip Erdogan says he will confront French President Nicolas Sarkozy over his negative stance towards Muslim Turkey's bid to join the European Union when he visits Ankara later on Friday.

"We warned Sarkozy a lot on this subject. We said that the form of your approach to Turkey was very wrong," Erdogan said in an interview with the ATV news channel aired late on Thursday.

"And I will ask him this tomorrow. I will say, 'Look, you have made such and such a statement again, but you say different things to me'."

Turkey's bid for EU membership is faltering. Of Turkey's 35 chapters - or negotiating subjects - only one has been completed, 12 are under discussion and 18 have been frozen because of opposition from France, Cyprus and other members.

Sarkozy has not visited EU candidate Turkey since he came to office in 2007, and to Erdogan's chagrin Sarkozy is only coming now in his capacity as president of the Group of 20 nations.

Officials in Paris sought to downplay chances of talks focusing on Turkey's flagging bid to join the 27 nation bloc during Sarkozy's visit, saying his meetings with President Abdullah Gul and Erdogan would mainly focus on G20 issues and Middle East foreign policy matters.

Erdogan has said Turkish-French relations warrant a more substantive visit than the few hours Sarkozy has allocated. Bilateral trade was around 12 billion euros in 2010, and France is among the largest foreign investors in Turkey.

In an interview with a Turkish newspaper published on Friday, Sarkozy reiterated his opposition to Turkey becoming a full member of the European Union, saying he would prefer it to become a privileged partner because of its role as a large country and bridge between East and West.

"For this reason, I believe it is necessary to have as close relations as possible, without going for full membership of the European Union, which would not actually be beneficial for either Turkey or the European Union," he said in written answers to questions from the Posta daily.

Chancellor Angela Merkel shares a similar view to Sarkozy, and Erdogan, who is scheduled to meet her in Germany on Monday, before going for talks in Brussels on Tuesday with European Commission President Jose Manuel Barroso, chided both the French and German governments for obstructing Turkey.

"Don't change the rules during the game. You as Germany and France are now using your power to take such a stance against Turkey," Erdogan said. "I mean the EU needs Turkey, Turkey needs the EU."

Turkey, which began formal negotiations to join in 2005, complains of unfair treatment, having seen other would-be members make faster progress.

"They presumably want us to give up. We are resisting this," said Erdogan.

The Turkish prime minister said the if the European Union were to reject Turkey outright, it would still pursue reforms to bring economic and social legislation into line with Europe.

His Justice and Development Party, known as the AK Party, made EU membership its top foreign policy goal, but public support has waned.

After a decade of rapid growth, Turks are more confident in their economy, and have been put off by EU member states reluctance to admit them to the bloc, while also noting the economic problems besetting the euro-zone.